Irish Political Prisoners 1920-1962: Pilgrimage of Desolation is the second volume of a trilogy by Seán McConville, a professor in Law and Public Policy at Queen Mary University of London. 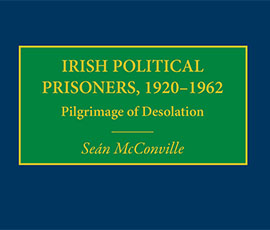 The book draws on a decade of exhaustive archive, interview and special collection research with gripping human-interest accounts from survivors of the period from the formation of Northern Ireland to the release of the last border campaign prisoners.

One of the striking sources was a 103-year-old man who fought against the British in World War One, against the Irish Government in the civil war and came to the UK in 1939 to bomb the mainland.

Key themes in the book include the use of imprisonment by paramilitary organisations, intra-Irish and Anglo-Irish relations, the prison in nationalist identity, prison regimes and law, and revolutionary groups. A significant amount of material is made public for the first time.

Topics range from attempts to build a republican consensus for direct action in the twenties and thirties and the 1939-40 bombings in Britain, to the Border Campaign of the 1950s; from riots, floggings, escapes and hunger-strikes to prisoners’ bitterness, splits and feuds.

Professor McConville said: “Much of the book sets out the story of Irish revolutionaries, particularly the IRA, who during the war of independence and civil war sought a role and destiny, paralleling the sometimes confused attempts of the two newly-established states to find stability, define identity and articulate purpose.”

The book, which runs to over 1,000 pages, will appeal to those interested in punishment and prisons, revolutionary organisations, Irish and Anglo-Irish history, politics, and lives in extreme conditions.

Published by Routledge on Wednesday 20 November 2013. The first volume Irish Political Prisoners: 1848-1922 Theatre of War has been described as the most wide-ranging study of the subject ever published.

To listen to a podcast of Professor McConville talking about the themes and people in the book please visit here….