For one night only, The Carnival of Lost Emotions rolls into Queen Mary

The Carnival of Lost Emotions rolled in to Barts Pathology Museum – part of Queen Mary, University of London – on Wednesday 13 March for a time-travelling journey through the dark world of long-forgotten and obsolete human feelings. 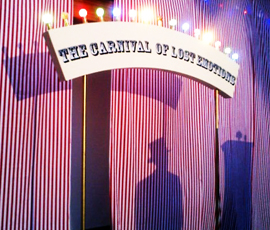 The event at the university’s Victorian medical museum was sponsored by the Wellcome Trust and organised by the Centre for the History of the Emotions at Queen Mary. It formed part of an international program of events in support of Brain Awareness Week 2013, a public campaign to raise awareness of the benefits of brain research.

The Carnival revealed and explored emotional states, seemingly ‘pulled from the ether’ by a ‘Lost Emotions Machine’ and acted out by academics from across London’s universities, who were cast as physicians, monks and scientists.

Conditions such as Acedia – a state of listlessness originally noted in monks and described as a precursor to the ‘deadly sin’ of sloth - Melancholy, Frenzy and Incubus were explored by a Ringmaster, played by Dr Tom Quick, a historian and participant in the BBC’s 2010 production, The Victorian Pharmacy.

Dr Chris Millard, whose research at the School of History focuses on attempted suicide between the late 1950s and mid-1970s in Britain, helped organise the event: “What the Carnival shows is that it’s fraught with problems to assume emotions from another time period hold the same cultural meanings as today.

“The feelings that we might think are universal human responses, might look just as nonsensical and alien to those who come after us, as ‘black bile’ and ‘humours’ look today.”

As an unusual alternative to the traditional academic seminar, the free event proved so popular that all tickets were snapped up in less than a day. “We wanted to start breaking the mould on the way academia engages with wider society and try something a bit different,” says Millard.

“We tried to communicate some big ideas and chose to do it through the intensely laborious process of a short play, despite none of us being professional actors. As Tom, the Ringmaster, commented during rehearsals – this is why nobody puts on a play for one night only.”

Researchers from across Queen Mary’s Faculty of Humanities and Social Sciences are affiliated with The Centre for the History of the Emotions, whose aim is to research the politics of passion, the experience of emotion, and theories of feeling past and present.

For more information and the History of Emotions Blog, visit http://www.qmul.ac.uk/emotions/index.html