From monks to prisoners, exiles to slaves, medieval chants and gangster rap - the Old Testament Book of  Psalms has offered comfort and inspiration to writers and musicians around the world, through the centuries and across religious divides. 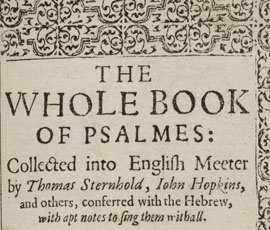 Now scholars from around the world, working across a range of different disciplines will come together to evaluate the importance of the Psalms to English culture at the first conference on’ Psalm Culture and the Politics of Translation’ at Queen Mary, University of London, Charterhouse Square from 15-17 July 2013.

Organised by English lecturers Dr Ruth Ahnert, Dr Tamara Atkin at Queen Mary and Dr Francis Leneghan of the University of Oxford, the conference will show that writers and thinkers, musicians and artists from the Anglo-Saxon conquest to the English Civil War turned to the Psalms in times of both trouble and tribulation and joy and jubilation.

While the conference will focus on the history of Psalm translation, their on-going influence will be explored in a round table discussion chaired by Rambert Dance Company’s current Music Fellow and artist in residence, Cheryl Frances-Hoad. It is hoped that the conference will provide the starting point for a new setting of one or more Psalm.

Dr Atkin said: “The Psalms have been influencing artists for over 2,000 years. In many ways they are the world’s longest running hit Number 1 hit record. In their focus on pain and suffering, they have offered a language to the marginalised and the oppressed; a language that is both highly personal and voices a communal experience”.

Dr Ahnert added: “We can travel back to the Tudor times and look at the writings of Thomas More who read and annotated his Psalter whilst awaiting execution. More recently, you only have to listen to Mississippi Blues or Reggae, Boney M's Rivers of Babylon and even Gangster Rap to appreciate the influence of the Psalms on 20th and 21st century popular music”.