Professor Geraldine Van Bueren and Professor David Ormerod were among eight legal professionals to be appointed to the role of honorary Queen’s Counsel (QC) in recognition of their contribution to the law outside of the courtroom. 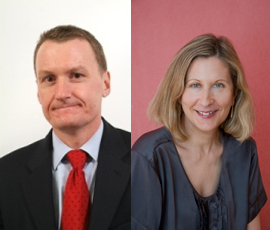 This prestigious award is only given to people who have made a major contribution to the law of England and Wales, and only to academics whose scholarship has significantly benefited the public.

Van Bueren, Professor of International Human Rights Law at Queen Mary, is one of the original drafters of the UN’s Convention on the Rights of the Child - the world’s most ratified human rights treaty. She was commissioned by UNESCO to write ‘Law’s Duty to the Poor’ which argues that the law and lawyers have a duty to assist the impoverished and the vulnerable in both rich and poor countries.

She has served as lead Commissioner for human rights on the Equality and Human Rights Commission and is a Bencher of the Middle Temple.  Her writings and books including ‘The International Law on the Rights of the Child’ have been cited before courts and legislatures around the globe. She has also advised governments including Uganda on children’s rights and Japan on child sexual exploitation, as well as, being consulted by the UN and the Commonwealth.

David Ormerod is a legal academic and barrister. He was appointed Law Commissioner for Criminal Law and Evidence in 2010 and is on secondment from Queen Mary until 2015. He is a Professor of Criminal Justice at the university and is author of numerous journal articles and book chapters, and several hundred case commentaries. He holds a number of editorial positions including editor of the Criminal Law Review. Professor Ormerod is a member of the Education Committee of the Criminal Bar Association and the Criminal Justice Council. He recently assisted the Judicial Studies Board in drafting their Crown Court Bench Book (2010).

Professor Valsamis Mitsilegas, head of Queen Mary’s Department of Law, said: “The appointment of not one, but two Queen Mary professors to the role of Honorary Queen's Counsel reflects the outstanding contribution and impact of our academics in law reform and legal practice at national and international level and the importance the Department of Law puts upon recruiting scholars of this calibre to the university."