Conference explores British anxieties on the eve of the Great War

The first in a five-year series of events to run at Queen Mary University of London in commemoration of the centenary of World War One will be hosted from 14-15 November. 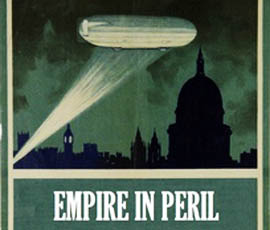 Organised by Dr Kim A. Wagner and Dr Patrick Longson from Queen Mary’s School of History, key themes and topics to be explored in the free public lecture will include ‘Spy Fever’, the Anglo-German pre-war rivalry, popular panic, imperial anxieties and invasion-scare literature.

Dr Wagner said: “I think it is important to investigate more thoroughly the relationship between the press, politics and popular culture at the time. This is essential to furthering our understanding of key aspects of Edwardian society and British identity on the eve of the Great War.

“There has been a huge surge of interest in the pre-war period, and we want this event to stimulate debate and reflection on the latest research in these areas, and identify avenues for further study, based upon a broader and more inclusive approach to historical analysis.”

The Empire in Peril: Invasion-scares and popular politics in Britain 1890-1914 conference will be held at Queen Mary’s Mile End Campus and is free to attend. For further information on the event read more here.

Queen Mary is launching a programme of research, teaching and public engagement to mark the centenary of the First World War. For more information visit www.qmul.ac.uk/WW1.