The Archbishop of Canterbury, the Most Rev Justin Welby was the keynote speaker at a unique summit of over 100 national leaders from Britain’s civil society institutions hosted by Queen Mary, University of London on Wednesday 19 June 2013. 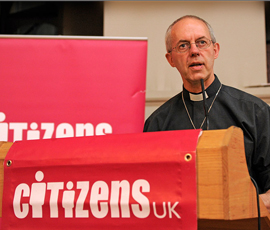 Archbishop of Canterbury speaking at The Summit. Photo @chrisjepson.com

Entitled ‘Planning Ahead for the Generation Summit’, the event was organised by Citizens UK - an alliance of local groups in London, Milton Keynes, Nottingham and Birmingham. It launched an ambitious strategy to influence the future of democracy and strengthen communities through the use of community organising.

Faith, education and third sector leaders including Farooq Murad, The Secretary for the Muslim Council of Britain, Frances O’Grady, the TUC General Secretary, Rabbi Laura Janner-Klauser, Movement Rabbi of Reform Judaism and the Archbishop of Westminster, the most Rev Vincent Nichols, spoke how their respective national networks can work together to address shared concerns, building towards a co-ordinated effort to influence the next General Election.

The Archbishop told the audience that the Church must cast off its “institutional deafness” to hear what people were saying, and to help to articulate a vision for society as a whole. He added that it “is a time of action by us, for all communities.”

He said: “From our origins in the People’s Palace when we offered education and social activities to the residents of Victorian London's East End, through to our pioneering MA in Community Organising, we have always sought to make a positive impact in our community. As one of the UK’s leading higher education institutions, we will continue to contribute toward the civic life of the nation.”

Queen Mary was the first university to become a Living Wage employer in 2006 and also runs an MA in Community Organising, the only programme of its kind in the UK, which is a new type of course which provides students with practical work experience alongside the theory of politics.