Queen Mary, University of London researchers have been awarded a major Medical Research Council (MRC) grant for a project to reduce the amount of salt consumed by children and their families in China. 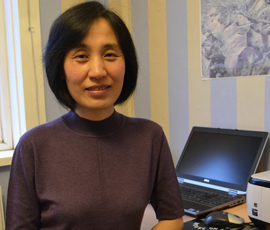 The project is led by Dr Feng He, a senior research fellow, and Professor Graham MacGregor, Professor of Cardiovascular Medicine and Chairman of WASH (World Action on Salt and Health), both at QM’s Wolfson Institute of Preventive Medicine, part of Barts and The London School of Medicine and Dentistry. The study is in collaboration with Professor Yangfeng Wu at The George Institute China and Peking University School of Public Health. The MRC has awarded £761,888 for the project over a two-year period from September 2012 to August 2014.

Dr He said: “The funds will be used to carry out a randomised trial to test whether an education programme targeted at school children can lower salt intake in children and their families. In this study, we will educate children on how to reduce salt intake, and then we will empower children by asking them to deliver the salt reduction message home to their families, particularly the person who does the cooking and prepares food for the whole family.”

The study will involve children between the ages of 10 and 11, and their parents and grandparents in Changzhi, Northern China. It is well known that high levels of salt in people’s diet increases blood pressure, and raised blood pressure increases the risk of cardiovascular disease, including strokes, heart attacks and heart failure. The World Health Organisation (WHO) recommends that all adults should reduce their salt intake to less than five grams per day, but studies show that consumption is around 12-14 grams per day among adults in China. Salt intake in Chinese children is also very high.

“Another important feature of our study is that we are establishing a new model to improve public health. Instead of the traditional way of using the healthcare system, we are going to use the primary school education system. Because universal primary education is a common goal in most national education policies, our approach will have a greater impact than the usual healthcare system, which, in most low- and middle-income countries, focuses on treatments only and has little capacity for prevention.

“Our study has wider implications. Despite the study being carried out in China, the education programme could be adapted by many other low- and middle-income countries where the majority of salt in the diet is added by consumers themselves.

“A reduction in salt intake across the whole population, even by a small amount, for example one gram a day, will have a major impact on reducing the number of strokes, heart attacks and heart failure in the population, and will save money for individuals, their families and the health service.”