Queen Mary, University of London has announced that it will receive Phase II funding through Grand Challenges Explorations, an initiative created by the Bill & Melinda Gates Foundation that enables individuals worldwide to test bold ideas to address persistent health and development challenges. 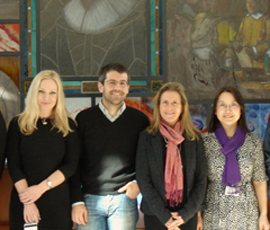 Professor Marelli-Berg with some of her research team

Professor Marelli-Berg’s main research interest concerns the regulation of activated T lymphocyte trafficking. She explains: “We will test the theory that using soluble substances derived from the gut known as ‘homing factors’ to help to boost the body’s response to vaccines can also induce the development of memory T, a type of blood cell which is responsible for the removal of pathogens and infected cells.

“These cells selectively migrate to the gut to fight pathogens there. This will greatly enhance protection against infections of the intestinal tract, such as cholera and nematode infestation.”

The £600,000 award will allow her team to fully develop a vaccination strategy selectively targeting mucosal tissue, much needed to prevent deadly diseases throughout the world.

In 2009, Professor Marelli-Berg was awarded a Phase I grant for ‘Programming T cell homing in vaccination against gut pathogens’ program, which allowed her to conduct preliminary work to test her idea. Grand Challenges Explorations (GCE) Phase I recognised individuals worldwide who are taking innovative approaches to some of the world’s toughest and persistent global health and development challenges. GCE invests in the early stages of bold ideas that have real potential to solve the problems people in the developing world face every day.

Phase II recognizes those ideas that have made significant progress toward implementation.

“Investments in innovative global health research are already paying off,” said Chris Wilson, director of Global Health Discovery and Translational Sciences at the Bill & Melinda Gates Foundation. “We’re excited that we consistently receive so many surprising ideas from around the world and that we’re able to provide a second round of funding for some of the most unconventional among them.”

Applications for the current open round, Grand Challenges Explorations Round 10, will be accepted until November 7, 2012.