Professor Sir Nicholas Wald, Director of the Wolfson Institute of Preventive Medicine, at Barts and the London School of Medicine and Dentistry, is to receive the Hamdan Award for Medical Research Excellence in the field of fetal medicine. 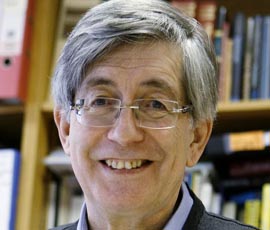 The international award is in recognition of Professor Wald’s pioneering contributions in antenatal screening for congenital malformation. This includes his work in the 1970s which showed fetal neural tube defects could be detected by measuring alpha-fetoprotein in the mother's blood –the first example of screening for fetal abnormalities.

Professor Wald said: “I am delighted to be awarded this honour. In receiving it I would like to acknowledge the help and collaboration of many friends and colleagues throughout the world.”

The Hamdan Award is in its seventh year and was established in Dubai to honour and recognise the contributions of distinguished researchers whose work has positively affected thousands of lives globally. It is awarded to three different individuals each in a selected field of medicine. For 2011/12 the selected areas were fetal medicine, nutrition in infants and inborn errors of metabolism.

The award ceremony will be held in Dubai in December.

Professor Wald was elected a Fellow of the Royal Society (FRS) in 2004, and was knighted in the 2008 Birthday Honours for services to preventive medicine.

*Barts and the London School of Medicine and Dentistry is part of Queen Mary, University of London.