A play inspired by Bart’s Pathology Museum at Queen Mary, University of London will be performed at the venue on Thursday 5 July. 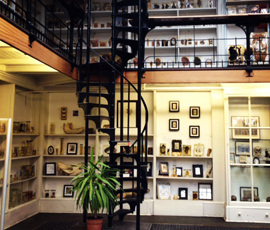 The performance by second-year students of the London Academy of Music and Dramatic Art (LAMDA) is to be staged in ‘promenade’ style, with both performers and audience sharing the same space. It was written after students visited the site in a quest for knowledge and inspiration from the thousands of medical specimens it contains.

LAMDA performance director Naomi Jones says: “Using some of the stories from the thousands of specimens housed within this amazing building, the acting students, together with myself and writer Danusia Iwaszko have devised a piece of theatre which investigates the individual histories of the exhibits, as well as the history of building itself. The result is a part factual, part fictional account of this fascinating space, and the people who have secured its survival.”

St Bartholomew’s (Bart’s) Pathology Museum, housed within the grounds of St. Bartholomew’s Hospital at West Smithfield, is a valuable resource for the education of Queen Mary’s medical students. It has also become a popular venue for unique evening seminars, workshops, events and art exhibitions.

Opened in 1879 by Edward VII the site contains some 5,000 preserved medical specimens, with a focus on cardiovascular, reproduction, cancer and forensic medicine. Specimens on display include the skull of John Bellingham - the assassin of the Prime Minister, Spencer Percival - who was 'hanged and anatomised' for his crime in 1812.

Entry to the LAMDA performance is free and open to the public. The show lasts for approximately one hour, with performances at 2.30pm and 6pm. Audience members are asked to arrive promptly and be prepared to stand and move around the room if required.