Professor Jack Cuzick from the Wolfson Institute of Preventive Medicine at Queen Mary, University of London, is to receive an international award in recognition of his outstanding cancer prevention research. 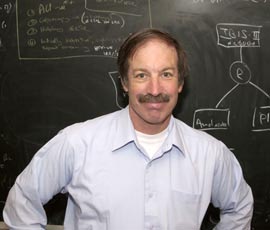 The American Association for Cancer Research (AACR)-Prevent Cancer Foundation Award for Excellence in Cancer Prevention Research is given to a scientist deemed to have made seminal contributions to the field, conducting studies which have stimulated new directions in this important area.

Professor Cuzick, Professor of Epidemiology at Queen Mary, said: “I am delighted to receive this award in recognition of all those who have been a part of my work over the past decades.

“This has been an extraordinary period to be in this field and I have been lucky enough to benefit from working with so many first class researchers from around the world.”

Having originally trained in mathematics, Professor Cuzick has become a leading epidemiologist over the past three decades, working on screening and prevention of cancer. He is internationally recognised for his major role in developing the field of chemoprevention of breast cancer. In 1985 he made the seminal observation that, in addition to reducing the recurrence rate of breast cancer in women being treated for breast cancer, the drug tamoxifen can also prevent the occurrence of new contralateral tumours.

More recently he has been a leader in the introduction of aromatase inhibitors, both for the treatment of breast cancer (ATAC trial), and as a better agent for chemoprevention. Professor Cuzick has also made valuable contributions to assessing the risk of developing breast cancer and also in cancer screening. He has led in the establishment of standards for the organisation of cancer screening programmes, has been one of the world’s leading proponents of HPV testing for primary screening and was a major force in the demonstration of the efficacy of endoscopic screening and its introduction in the UK.

The award is due to be presented at the 11th Annual AACR International Conference on Frontiers in Cancer Prevention Research in California later this month.