New research will investigate role of hygiene in infant growth

Dr Andrew Prendergast, Senior Clinical Lecturer in paediatric infection and immunity at Queen Mary, University of London, has been awarded a Fellowship by the Wellcome Trust to study the effect of improved sanitation on the health of infants in developing countries. 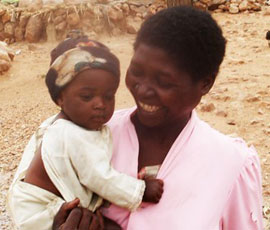 While many earlier trials have assessed the impact of improving nutrition in early life, results have shown only a marginal improvement in the growth of children. Dr Prendergast and his team will be testing the presumption that, in addition to improving nutrition, it is essential to also improve sanitation and hygiene.

He will work largely in Zimbabwe, studying 4800 pregnant women and their babies in two rural farming communities. The women will be randomly assigned to four groups: one with improved infant nutrition, a group with improved sanitation (including the building of a toilet, installation of a hand washing device, treated water at the point of use, and teaching to change general behaviour and practices), a group which has both interventions together, and one where standards remain the same.

The children in each community will have their small intestine and immune system assessed at three-monthly intervals, with the endpoint being their height and whether or not they have anaemia at 18 months of age.

Almost fifty years ago it was recognised that children in developing countries almost universally develop a condition of the small intestine, similar to coeliac disease, called environmental enteropathy. While they may appear healthy, there is a connection between this bowel condition and poor growth. It is likely that the bowel condition also speeds up HIV disease progression in children and prevents oral vaccines from working effectively, putting those in developing countries at greater risk of infectious diseases.

Exposure to an unsanitary environment is thought to cause inflammation of the small intestine, which becomes leaky, allowing usually harmless bacteria to cross into the bloodstream where they stimulate the immune system. This constant triggering of the immune system uses a lot of energy and is likely to suppress the hormones required for growth.

Dr Prendergast commented: “One in three children in developing countries suffers from chronic malnutrition, which manifests as stunted growth. Children who are stunted have poorer health, fewer years in school, lower adult productivity and a higher chance that their own children will also be stunted.”

“It is therefore a problem that affects whole societies in many parts of the world, and is surprisingly difficult to prevent.  Poor growth in these children starts soon after birth, and a child's height at age two determines their long-term outcome, so interventions are needed very early in life.”

This is only the second ever randomized trial of sanitation and hygiene to have been conducted.  If the researchers are able to show that improved sanitation and hygiene in rural Africa leads to improvements in child growth and anaemia, it will provide evidence to support a roll out of improved sanitation to the 2.6 billion households who currently do not have adequate facilities, and would potentially improve the health of many children globally.

Dr Prendergast works at Zvitambo, a research organisation based in Harare, which is linked to Johns Hopkins School of Public Health, where he holds an honorary appointment in the Department of International Health.  He also works at the University of Zimbabwe in Harare, working on studies of HIV-infected children, and as a paediatrician at the Children’s Hospital in Harare.  In London, he is an Honorary Consultant Paediatrician at Barts and The London Children’s Hospital.