Professor Mike Curtis has been appointed as Deputy Vice-Principal (Health) at Barts and The London School of Medicine and Dentistry. 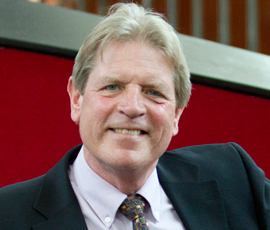 Professor Curtis is Director of the School's Blizard Institute and Director of Queen Mary's Centre for Public Engagement and will take on the new post alongside these roles.

He has worked in the School since 1985, originally as a senior scientist with the MRC and since 2000 as Chair in Microbiology, and in that time has overseen the creation of the award-winning Blizard building, including the highly successful Centre of the Cell.

Professor Curtis' new post is a critical one for the School, working closely with the Vice Principal, Professor Richard Trembath, to develop and deliver the School's strategy for the future.

Professor Curtis said: "I'm delighted to be taking on this new role. The School has seen some unprecedented achievements in recent years, both in terms of our research and our teaching. The challenge now is to continue our success by adapting and responding to the changes in higher education and health care."