New research into type 2 diabetes, social media, space plasma, and cabbage genetics that could boost crop production are just some of the collaborative projects to be carried out by academics at Queen Mary, University of London and its partner university, the University of Warwick. 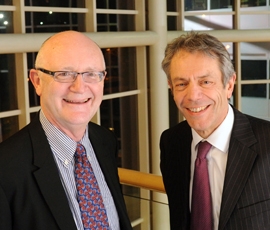 Queen Mary and Warwick formed a partnership in March 2012, in a move to benefit students and academics at both institutions, particularly in areas of flagship and innovative research. As part of this partnership, the two Russell Group institutions have jointly funded 13 collaborative projects of three to nine months in duration, with a maximum grant of £30,000 each, totaling £230,000.

Project highlights include Professor Richard Nichols and Professor Andrew Leach of Queen Mary’s School of Biological and Chemical Sciences working with Warwick’s Professor Jim Benyon on Combining the Needle with the Haystack: The challenge in Plant Genomics. They will use new technologies to sequence and analyse huge volumes of DNA.

“We’re taking the unusual step of being unpleasant to cabbages,” says Professor Nichols. “This strange experiment was suggested by evidence that stress may trigger dramatic changes in their chromosomes: some segments of the DNA will be copied and shuffled into the rest of the genome. Such changes can affect the activity of genes; most of which will harm the plant or be innocuous – but a minority may lead to valuable innovations. The study is important to both fundamental biology and to the breeding of new crops with increased yield and the ability to grow in ever more marginal land.”

Professor Graham Hitman and Dr Sarah Finer of Queen Mary’s Blizard Institute will be working with Dr Gyanendra Tripathi and Dr Ponnusamy Saravanan of Warwick Medical School on a study that brings together both biology and genomics and could lead to new methods of obesity and diabetes prevention.

Professor Hitman says: “This exciting project brings together complementary expertise in adipocyte biology from Warwick and genomics here at Queen Mary. The project adds to recently funded studies and creates an exciting platform to bring lab and patient-based studies together. It is hoped that data from this initiative will help us get significant external funding to support clinical translation of our findings to prevent obesity and type 2 diabetes through nutritional intervention and altering metabolic programming.”

Professor David Burgess from Queen Mary’s School of Physics and Astronomy is collaborating with Professor Sandra Chapman (Department of Physics, Warwick) to take existing expertise in space plasma – the state of matter that makes up the universe - into the new area of nuclear fusion energy research. Their research will use high performance computing to investigate the formation of plasma structures on the edge of fusion plasmas, which play an important part in energy transport.

Professor Pat Healey from the School of Electronic Engineering and Computer Science at Queen Mary joins Dr Thomas Hills of Warwick’s Department of Psychology and Dr Pietro Panzarasa of Queen Mary’s School of Business and Management in a multi-disciplinary study of group innovation and creativity in social media. Professor Healey says: “The recent growth in new social media technologies and applications, such as Wikipedia, Zopa and Linux, place a premium on understanding how groups create and leverage social capital to foster innovation and creativity.”

A full list of funded collaborative projects can be found below.