Prostate truffles, STD cupcakes, ulcerated legs and fungal toenail biscuits were among the 3,000 anatomically-correct cakes, cookies and cocktails snapped up by visitors to St Bartholomew's Pathology Museum last weekend, in a sell-out baking festival that made headlines across the world. 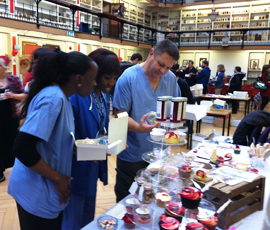 The museum at Queen Mary, University of London’s West Smithfield campus played host to Eat Your Heart Out 2012 – a disease and anatomy themed educational ‘pop-up cake shop’ – from 26-28 October.

The shop was a huge hit with families, baking enthusiasts, students and medical professionals, with many bulk buying ‘diseased’ cupcakes for their healthcare colleagues.

A series of pathology lectures took place over the weekend between cake sales, to inform guests on the real-life conditions portrayed by the edible treats. Queen Mary’s Dr Anne Szarewski spoke on HPV and cervical cancer, Professor Peter Vanezis on the forensic techniques used to catch serial murderers the ‘Railway Killers’, and Kirsty Wadsley on pathways to studying medicine.

The show was created by freelance creative director Emma Thomas, as her alter-ego Miss Cakehead, in partnership with the museum’s technician Carla Connolly.

Co-organiser Connolly comments: “The project achieved exactly what we hoped it would – the cakes were incredibly well received and the bakers have been approached by charities and teachers who would like to utilise their creations as educational tools. The press has been overwhelmingly positive, with everyone from Loose Women and The One Show to the Guardian taking an in interest.

“The museum received many visitors who had previously not known we were here. The most exciting thing was the many people learning something new during the short lectures, myself included!”

Media from almost every continent reported on the ‘world’s first anatomical cake shop’, with photographs of the goods going viral across the internet. Twenty of the UK’s most talented cake makers and cocktail shakers took part in the event, making every effort to ensure their creations were as true-to-life as possible.

The Grade II listed Victorian museum at St Bartholomew’s Hospital is leased by Queen Mary, University of London and is independent from the hospital. Housing 5,000 medical specimens, its lower floor is open to the public during evening events and seminars.

QM holds a Public Display License for the museum's contents, enabling a unique and popular series of interesting evening seminars to be held in the building, focusing on topics from medicine, humanities and popular culture. This year’s events included a 'Mending Broken Hearts' seminar on Valentine's Day which helped to raise money for The British Heart Foundation, a play written and performed by LAMDA students, and lectures on subjects including bodysnatching, Joseph Merrick, and the Life and Death of Marilyn Monroe.