Barts Pathology Museum at Queen Mary, University of London’s West Smithfield campus will hold a special evening seminar on Tuesday 15 January – the anniversary of the gruesome and much-publicised Black Dahlia Murder. The event will focus on cultural depictions of the case, followed by a wider look at forensic science and cases of dismemberment. 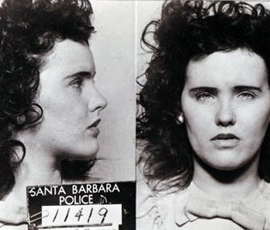 On January 15th, 1947, the dismembered body of 22-year-old Elizabeth Short was discovered on a vacant lot in Los Angeles, California. To this day, the murder is unsolved, but the brutality of the crime and Short’s ‘femme fatale’ persona have ensured The Black Dahlia Murder remains a part of crime folklore.

Crime fiction scholar and editor Steven Powell runs the blog The Venetian Vase and is author of the essay Betty Short and I Go Back: James Ellroy and the Metanarrative of the Black Dahlia Case. He has edited the books Conversations with James Ellroy and 100 American Crime Writers. His talk, I Never Knew Her in Life: Cultural Depictions of the Black Dahlia Case, focuses on the enduring popularity of Short’s life and death in newspapers, novels, and films.

Professor Peter Vanezis OBE, Professor of Forensic Medical Sciences at Queen Mary, has first hand experience of dismemberment cases, similar to Short’s, over the course of his career. In his talk, The Investigation of Dismembered Remains, Professor Vanezis will discuss three of those cases.

Professor Vanezis is based at the William Harvey Research Institute – part of Queen Mary’s medical school. He has acted as advisor to the Russian authorities on the identification of the Romanovs, worked on the investigation into the death of Princess Diana, and is currently a Consultant Forensic Home Office Pathologist, Senior Consultant in Forensic Medicine to the Armed Forces and Director of Cameron Centre for Forensic Medical Sciences.

Entry to the event is £6 and includes refreshments and a themed cocktail. There will also be a chance to win a copy of the film The Black Dahlia, directed by Brian De Palma.

Doors will open at 6:30pm for drinks and the chance to view the museum’s medical specimens. Lectures will begin at 7.00pm. Tickets can be booked through the QM E-Shop: http://tinyurl.com/bartsdahlia