Some 100 young artists from across the world will descend on Queen Mary, University of London this summer for a performance bonanza, as part of the city’s cultural Olympiad. 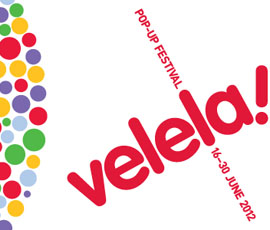 From Saturday 16 – Saturday 30 June, the Mile End campus will host an exchange of ideas and performances at the first ‘Velela!’ Pop-Up Festival from international youth arts charity Phakama.

Performances at the two-week event are open to the public. Film screenings at QM’s Alfred Hitchcock cinema, round-table debates and the creation of sculptures - to be fired as part of the festival’s closing ceremony - are just some of the activities taking place over the fortnight.

With drought a huge problem across the world, the ‘Message in a Bottle’ project enables young people from several European countries, including the UK, Bosnia, Turkey and Portugal, to investigate creatively and practically how water (or the lack of it) impacts on their lives. Using water as a theme for creative collaboration, participants will perform alongside the Regent’s Canal during the festival.

The festival will also feature some of the work taking place in the ‘Edible Garden’ venture (at the Mile End Children’s Park growing zone), a community garden created in partnership with the East End Women’s Institute that sees three generations of local women come together to grow produce and cook for the community.

At the core of the festival will be 35 volunteers from Tower Hamlets and surrounding areas who will act as front of house staff, technicians, production support staff and communications assistants.

Queen Mary students will also be involved with the festival, carrying out documentation and research as photographers and reporters, or contributing to event administration and production in a range of voluntary roles.

The event has been organised by Phakama in partnership with QM’s Department of Drama - recently named as best in the country in the Guardian’s University Guide 2013.

Fabio Santos, Artistic Director of Project Phakama’s UK says: “This festival, held to mark Phakama’s fifteenth anniversary, will give the necessary space for young people to explore some of the most pressing challenges of our time. They will experiment, develop skills, collaborate, exchange ideas, rehearse and celebrate new ways of living and making art in response to the world.”

Project Phakama was set up in 1996 by the London International Festival of Theatre (Lift) in partnership with Sibikwa Community Theatre, Johannesburg. It was originally launched as an arts exchange programme involving young people and arts and education practitioners from communities throughout South Africa and the UK.

In 2009 it became an official resident arts organisation at Queen Mary. The wider Phakama organisation has branches across most continents.

Time: See http://www.projectphakama.org/velela for a full timetable of performances