A film historian at Queen Mary, University of London has been uncovering the secret past of British cinema in a private collection of production records for thousands of films, including such iconic titles as The African Queen, Dr No and Zulu. 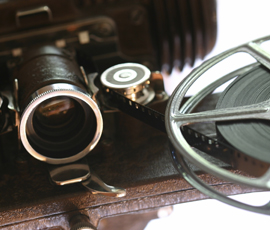 The unique production archive is owned by Film Finances Ltd, underwriters of many major British films made since the 1950s. The company has kept complete documentation for every production it has guaranteed, including letters, telegrams, shooting schedules, scripts, storyboards and even doctors’ certificates.

In 2009, Film Finances (FF) invited Charles Drazin, from the Department of Film Studies at QM, to delve among the millions of papers that it has accumulated over the past 60 years.

Astonished to find such a wealth of material, Drazin told the company that they were sitting on the “single most important collection of primary materials relating to the history of the post-war British cinema”. Adds Dr Drazin: “The archive also provides an unrivalled insight into the production challenges of each film and the personalities involved,” explains Dr Drazin.

In 2011, Dr Drazin wrote A Bond for Bond, a book documenting Film Finances’ crucial role in the making of Dr No, the first ever Bond feature; FF stepped in when the film ran substantially overbudget.

Over the past year, Film Finances has been compiling an inventory of papers for 600 films made between 1950 and 1980 that it intends to make publicly available. Already some of the world’s most important film libraries, including the British Film Institute, are keen to acquire and curate the collection.

On 12 October, the first ever public event devoted to the archive will be hosted by Living British Cinema, a forum promoting the appreciation of British film culture and history at Queen Mary.

Guests will learn the extraordinary story of Film Finances, one of the industry's most significant although little-known companies and see first-hand some of the fascinating material that the archive contains, including the progress reports that chronicle Bogart and Hepburn making The African Queen; the call sheet for the day that Ursula Andress, the original Bond girl, came out of the sea in Dr No; and Harold Pinter’s script for The Servant.

The event will also offer film historians and archivists an opportunity to contribute to a debate over the future of the archive as the company begins to think about where the papers will finally be kept and publicly displayed.

Some snippets from the Film Finances archive include:

‘The African Queen was found to have sunk this morning but the unit managed to pull her out of the water by 1pm. At 11am half the unit went down to the raft and lined up. The other members carried on helping to get the boat up.’

Bond producer Harry Saltzman offers a recipe for success in the movies during the shooting of Dr No (18 February 1962):

‘Cubby and myself feel very optimistic about the commercial possibilities of this picture. I feel we should recover our entire production cost out of the UK. The picture has size, movement, excitement and no message.’

‘I am very glad to be able to tell you that in my opinion and from the little he has done so far, Michael Caine as “Bromhead” is very good indeed. When he was cast for the part I couldn’t see it but I think (and hope) I was wrong.’

‘I look back on our association with a great deal of pleasure and I particularly enjoyed our experience together in Berlin. I’ll always think of you as the coach who laid out the game plan and then sent me in during the last period to sew up the victory.’

A question and answer session will follow presentations with directors from the company, as will several prominent film historians and archivists.

To book places to this free event, go to: http://livingbritishcinemaff.eventbrite.co.uk/