Dr Thomas Asbridge, of Queen Mary, University of London, will present The Crusades, a new three-part series tracing the history of the 200-year war between Christians and Muslims for control of the Holy Land. The first episode will air on BBC Two and BBC HD at 9.30pm on Wednesday 18 January. 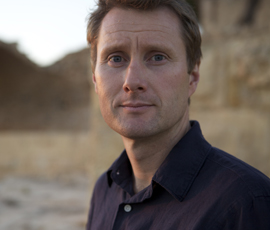 Dr Asbridge, a reader in Medieval History at Queen Mary’s School of History, filmed on location across the Middle East, North Africa and Europe, visiting numerous archives – from Jerusalem’s Aqsa Mosque to an isolated island monastery in Venice – to reveal rarely seen manuscripts and artefacts.

In his three-part series, Dr Asbridge presents a revelatory account of the Crusades. This part of history is remembered for its religious fanaticism and unspeakable violence, but his research, based on both eyewitness testimony and contemporary evidence from both the Christian and Islamic worlds, offers a new interpretation of how these two mighty religions waged war in the name of God.

Dr Asbridge says: “This landmark series will be controversial, because it challenges the most ingrained misconceptions surrounding the crusades: the notion that these holy wars were all about greed and plunder; the image of Saladin – the Islamic icon – as a paragon of justice and clemency; and the myth that the medieval crusades sparked a clash of civilisations between Islam and the West that continues to this day.”

The first episode of The Crusades traces the epic journey of the First Crusaders, as they marched 3,000 miles from Europe to recapture the city of Jerusalem from Islam. They endured starvation, disease and bloodthirsty battle to reach their sacred goal, then unleashed an appalling tide of barbaric violence upon their Muslim enemies. Far from being the invincible holy warriors of legend, Dr Asbridge reveals that these crusaders actually considered surrender half way through expedition.

The second episode of the BBC Two series examines the Third Crusade and its renowned figures: Richard the Lionheart, king of England, and the mighty Muslim sultan Saladin, unifier of Islam. Drawing on fascinating eyewitness accounts and contemporary records, Dr Asbridge will construct an insightful picture of these men and their fiercely fought struggle for the Holy Land, revealing how their conflict brought Saladin and Richard to their knees, even as it served to create their legends.

In the concluding episode of the series, Dr Asbridge reveals that the outcome of these epic holy wars was decided not in Jerusalem, but in Egypt. Drawing upon eyewitness chronicles and the latest archaeological evidence, he argues that it was a fearsome slave-warrior from the Russian Steppes – now forgotten in the West – who finally sealed the fate of the crusades.

Dr Asbridge joined Queen Mary in 1999. His book, The First Crusade: A New History, was published to widespread international acclaim in 2004, prompting reviews and comments in publications as diverse as The Times, The Guardian, The Washington Post, The New Yorker and The Big Issue. His latest book The Crusades – The War for the Holy Land was published in 2010. Dr Asbridge is director of Queen Mary’s new MA in Islam and the West and chairs the Islam and the West Research Seminar.