Professor Galin Tihanov of Queen Mary, University of London has received a prestigious award for his edited books on the history of Russian literary theory. 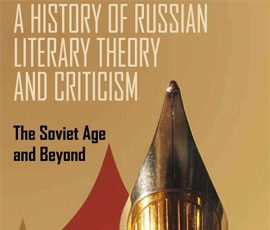 Professor Tihanov holds the George Steiner Chair of Comparative Literature at the College’s School of Languages, Linguistics and Film. He was awarded the Efim Etkind prize with Professor Evgeny Dobrenko (University of Sheffield) for their work A History of Russian Literary Theory and Criticism: The Soviet Age and Beyond and its Russian equivalent (Istoriia russkoi literaturnoi kritiki: sovetskaia i postsovetskaia epokhi).

Professor Tihanov and Professor Dobrenko edited the two volumes and contributed several key chapters. They were awarded in the category “best book on Russian culture” and received a prize certificate and statuette, accepted by one of the books’ contributors in St Petersburg in their absence.

The works are the collective effort of fourteen leading scholars from the UK, Russia, USA, Germany and Italy. They are the first books, in any language, to offer a comprehensive history of Russian literary theory and criticism from 1917 to the post-Soviet age.

The collection of writings focuses on important theorists and major critical movements during a chaotic ideological period in Russia’s history, including developments in émigré literary theory and criticism (the work of those who left, or were forced out, to settle in another state - usually for political reasons).

“We started work on this project back in 2004,” says Professor Tihanov. “Its scale and innovative nature meant that the two volumes took a long time to plan and complete. I am deeply honoured by the Efim Etkind Prize and thrilled and delighted that the project came to fruition during my first year at Queen Mary.”

The Efim Etkind prize was established in 2006 and is awarded every two years by an international jury comprising nine scholars from the UK, USA, Russia, Israel, Germany and France. It is named after prominent literary scholar and translator Efim Etkind (1918-1999) who was forced to leave Leningrad in 1974. He settled in France and taught as Professor of Russian Literature at the Sorbonne. During the last years of his life, Etkind sat on the Board of Trustees at St Petersburg University, the institution that now hosts the award ceremony.