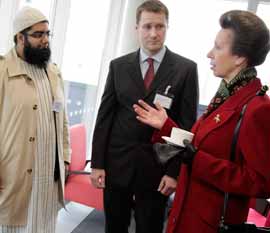 HRH the Princess Royal meets students on the Islam in the West MA and course lecturer, Dr Thomas Asbridge

ArtsTwo is home to the School of History, with some 70 members of staff and a 650-strong student cohort. The Leo Baeck Institute, London, a leading research hub for the study of German Jewish history and culture is also based in the building.

The five-story edifice, nominated for three architectural awards, has a suite of seminar rooms and a 300-seat lecture theatre – facilities that serve the entire College and local community. The burgeoning Film and Drama Departments also benefit from ArtsTwo’s purpose-built studio for teaching and research, in addition to public lectures and performances.

At the start of the Royal visit, crowds of pupils from St Paul’s Way Trust School, a Tower Hamlets secondary school which Queen Mary works closely with, lined the procession route, cheering and waving Union Jack flags. Two of the school children, Head Girl (Farjana Begum) and Head Boy (Tanvir Rafe), greeted the Princess on her arrival with a posy of fresh flowers.

The Princess was then received by Professor Geoffrey Crossick, Vice-Chancellor of the University Of London, and introduced to Sir Nicholas Montagu, QM Chairman of Council and Professor Simon Gaskell, QM Principal.

The party viewed the newly re-developed perimeter of the Novo Jewish Cemetery, situated in front of ArtsTwo, which dates back to 1733. The consecrated ground belongs to the Sephardi Jewish Congregation, the first Jews to return to England after their expulsion in 1290 by Edward I.

Rabbi Dr Abraham Levy, Spiritual Head of the Spanish and Portuguese Jews’ Congregation who oversaw the landscaping, provided the Princess with an overview of the history of the cemetery. The landscaping has been completed to coincide with the official opening and offers visitors new information plaques about this unique site.

Once inside the building, the Princess met Professor Morag Shiach, Vice Principal for Humanities and Social Sciences; Sophie Richardson, President of the Students’ Union and Professor Miri Rubin, incoming Head of the School of History (Sept 2012).

During a tour of the building, the Princess met History academics, including Dr Dan Todman and five undergraduates who are studying his course on the First World War and helping to redevelop the WWI galleries of the Imperial War Museum.

The Princess also talked to three MA students taking the ‘Islam and the West’ course, alongside course convenor, Dr Thomas Asbridge, who recently presented the BBC2 series The Crusades. Postgraduate research and recently published books by academics were also discussed.

Staff and students from the School of Languages, Linguistics and Film and the School of English and Drama, which both use ArtsTwo for teaching and research, met the Princess. Especially for the Royal visit, Drama students staged a multi-media performance after Film students screened a documentary they had written and produced.

The party visited the offices of the Leo Baeck Institute and met with its Chairman, Professor Peter Pulzer; Professor Raphael Gross, Director and Dr Daniel Wildmann, Deputy Director, who talked about their programme of joint teaching with the School on European Jewish History at QM.

After meeting the Estates team and architects (Wilkinson Eyre) behind the building design, the Royal visit concluded with a stone plaque unveiling in the ArtsTwo auditorium. Speeches were given by the Chairman of Council, the Principal and Princess Anne, who remarked at how rapidly the campus had changed since in recent years.

The wording of the plaque: