An award-winning music agency created by a student at Queen Mary, University of London is set to supply top-class entertainment to 2,500 guests at the UK’s biggest entrepreneurs’ festival this September. 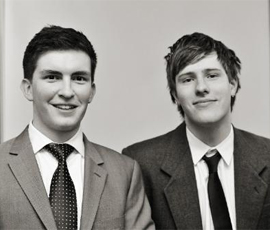 STAG Musicians Agency was set up by Ashley Smith, who is studying Environmental Science with Business Management at QM, and Jack Stookes – a third year student at the Guildhall School of Music and Drama. They have combined their passion for live music with Ashley’s business expertise to supply talented musicians to weddings, parties and other events.

The agency will be providing the musical entertainment for the MADE Festival, the UK’s leading celebration of entrepreneurship, from 19-21 September at Sheffield City Hall. Speakers at the event range from theatre producers and top journalists to the CEO of Cobra Beer, and include Dragon’s Den stars Peter Jones, Vince Cable MP and designer Wayne Hemingway MBE.

STAG Musicians Agency received £1,500 of funding from Queen Mary’s Student Entrepreneurship Prize Fund earlier this year, before going on to take first place in a national talent competition for young businesses and entrepreneurs.

The Enterprising Talent Final was the showcase finale to the first series of The Grad Factor (www.gradfactor.tv), the first ever digital TV show dedicated to graduate employment and student entrepreneurship. The UK-wide competition was sponsored by Natwest and private banking house, Coutts. As the winner, Ashley and Jack received a cash prize and the mentorship of a senior member of Coutts, Michael Hayman.

Ashley was asked personally by Mr Hayman to supply the entertainment at MADE. His acts will perform throughout the day at Sheffield City Hall in front of the festival’s 2,500 delegates and have also been booked for the evening’s VIP dinners, for companies including Irwin & Mitchell solicitors and Coutts Bank.

“This is a great privilege for the company and we are excited to be a key part of such a momentous event,” comments Ashley. “We are delighted to be able to offer an array of artists throughout the festival, which include a bespoke jazz band for the main event and a range of other string and jazz bands for the subsequent sponsor events.”