Two Olympic-themed projects at Queen Mary, University of London, have been recognised in an official celebration of UK universities’ contribution to the 2012 Games. 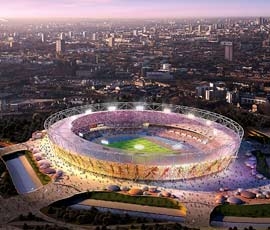 Podium, the higher education body for London 2012, awarded Bronze medals to the Department of Drama’s ‘Living Map’, and ‘A Living Wage Olympics’, a research project by the School of Geography.

They were chosen from more than 200 nominations, submitted by Olympic and Paralympic Games-related initiatives, programmes and partnerships produced by UK universities.

The School of Geography won Bronze in the ‘RCUK Award for Exceptional Research Contribution’ category, for research conducted by its undergraduates. The students evaluated the success of community organisations such as London Citizens in securing Olympic jobs, paid at the Living Wage of £8.30ph, for unemployed east Londoners.

Professor Jane Wills, who led the research, says: “Not only has our work helped London Citizens’ support job-seekers, the experience has developed our students’ research skills, their understanding of the impact of unemployment in poorer areas, and of the potential economic and social benefits of the Olympic investment in London.”

The project is just one part of Professor Wills’ decade-long research into the development and impact of the London Living Wage – a minimum hourly pay rate that affords a decent standard of living.

Ali Campbell, Senior Drama Lecturer, scooped Bronze in the ‘Award for Creative Cultural Project’ category. His ‘Living Map’ project joins people of different generations and cultures who live and work in the mile stretch from Stepney Green to Mile End tube stations. It won as part of the High Street 2012 celebrations of heritage and community in London’s Olympic boroughs.

‘The Living Map’ will generate: a silent movie chronicling ‘a day in the life’ of Mile End Road, with a soundtrack by a children’s community choir; a full-length film of conversations held by Mile End residents of different ages on a ‘travelling community sofa’; and an interactive website inspired by Google Maps and HistoryPin, co-devised with QM PhD Computer Science students, with content from project participants.

The Award ceremony takes place on 3 May at Forman’s Fish Island, overlooking the Olympic Stadium, with Olympians, Paralympians and government ministers in attendance. The event will be hosted by Rick Edwards, presenter of C4’s That Paralympic Show, with Paul Deighton, Chief Executive of London 2012, as a keynote speaker.

The awards take place during Universities Week (30 April – 7 May), a national campaign to increase public awareness of the varied roles that the UK’s universities play. This year’s theme is the London 2012 Olympic and Paralympic Games. Higher Education Institutions are showcasing the important contribution they make to past and present Games and the Olympic legacy.

For more information about Queen Mary and the Olympic Games, visit our Olympic research page.