Queen Mary, University of London is joining the celluloid celebration of the East End Film festival, with two film appreciation events this weekend. The annual six-day showcase celebrating London’s most dynamic quarter is expected to attract an audience of some 30,000 people. 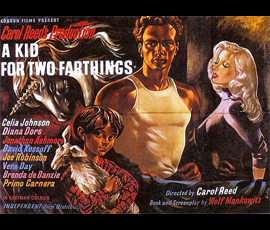 A Kid for Two Farthings

On Sunday 1 July the Centre for the Study of Migration at Queen Mary presents a look at the vibrant Jewish presence in 1950s east London, with a screening of Carol Reed’s 1955 feature ‘A Kid for Two Farthings’.

The film about a boy who buys a one-horned goat in Petticoat Lane Market, believing it to be a magical unicorn that could help his family, was shot in post-war Whitechapel and stars Diana Dors, Sid James and David Kossoff. It will be introduced by Dr Gil Toffell, who is currently researching Jewish life in the post-war East End with the Centre for the Study of Migration.

On the same day, a series of short films about east London’s diverse and colourful markets will be screened.

On the same day, a series of short films about east London’s diverse and colourful markets will be screened. Created by QM artist-in-residence Ranjit Kandalgaonkar, Dr Amit Rai of the School of Business and Management and local young people, the works record the markets’ movements and stories, as everything from Bollywood memorabilia to pirated bags or fresh fruit changes hands.

The project is a collaboration between Business and Film studies academics at QM, Ranjit Kandalgaonkar, the East End Film Festival and Hi8us South - an award-winning organisation working with disadvantaged young people to create media projects of a professional standard.

The film screenings will be followed by a panel discussion, chaired by Professor Janet Harbord of QM’s Department of Film. The conversation will explore how we create stories with the objects we buy or find, and how particular places become the exciting material for a story rather than just a backdrop. Kandalgaonkar shows how London’s bazaars, and those in his home-city of Mumbai, become more than just a site to exchange goods.

With events running at 12pm and 3pm, both screenings will be held at the Brady Arts Centre in Whitechapel and form part of the East End Film Festival's CINE-EAST fringe event, a day of completely free cinema, music, workshops and talks across 100 East London venues.

For a full programme of CINE-EAST events and more information on the East London Film Festival, visit http://www.eastendfilmfestival.com/cine-east-full-programme