Professor Bill Fishman, former lecturer in the School of History at Queen Mary, University of London was one of the guests of honour at a commemorative plaque unveiling to the Soviet leader Vladimir Lenin, held in Bloomsbury, on 30th November 2012. 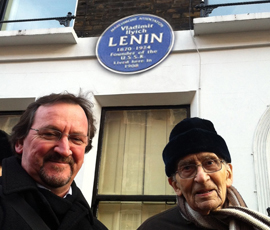 Lenin, the founder of the world’s first socialist state lived at 36 (formerly 21) Tavistock Place, London in 1908 while carrying out research at the British Museum for his major philosophical work, Materialism and Empiriocriticism.

The ceremony was arranged by the Marchmont Street Association, an active community group which seeks to commemorate the diverse literary, cultural and political figures who have lived in the area.

At the age of 91 Professor Fishman, whose links to Queen Mary date back to the 1970s, still has a keen interest in the history of East European radicals in London and most recently was Visiting Professor to the Centre for the Study of Migration. He is also the author of several books on topics ranging from revolutionary advocacy in Europe during the late 19th and early 20th centuries to the history of the East End of London.

Dr Bob Henderson, Honorary Research Associate, at Queen Mary, also attended the event. Dr Henderson was a former Russian curator at the British Museum where he carried out research into this period of Lenin’s life.

He said: “While working in the archives I was fortunate enough to unearth some previously unknown manuscripts, including letters Lenin had written under his real name ‘Ouilanoff’  to the Museum authorities from his flat in Tavistock Place.”