Two professors from Queen Mary, University of London have been appointed as Masters of the Bench by The Honourable Society of the Middle Temple. Middle Temple is one of four Inns of Court which has the exclusive right to Call people to the Bar - qualifying barristers to argue in court on behalf of clients. 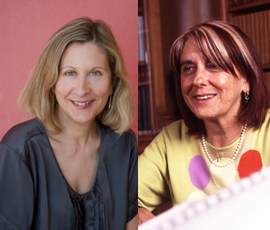 Professor Geraldine Van Bueren and Professor Lisa Jardine CBE were appointed at a ceremony on 8 February 2012 at Middle Temple Hall, Temple. They were Called with four other new members, including The Rt Hon Sir Declan Morgan QC, the Chief Justice of Northern Ireland and Jamie Lowther-Pinkerton, Private Secretary to HRH The Duke and Duchess of Cambridge and Prince Harry.

Professor Van Bueren was Called to the Bar in 1979 and as a member of the Inn, she will now participate in its governance. Professor Lisa Jardine was Called as an Honorary Bencher.

Masters of the Bench are nominated for their unique talents and skills, and bring a richness to the quality of events and services that the Inn offers to its members.

Commenting on the appointments, Professor Morag Shiach, Queen Mary’s Vice-Principal and Executive Dean for Humanities and Social Sciences, said: “The status of Bencher of Middle Temple is awarded only to those who have made a major contribution to public life, and it is with great pleasure that the Faculty of Humanities and Social Sciences welcomes this recognition of the important and influential contributions of Professor Jardine and Professor Van Bueren.”

Middle Temple admits those who have fulfilled the necessary qualifications to the degree of Barrister-at-Law. After a period of vocational training they are then permitted to either practise as independent lawyers in English and Welsh courts or to take employment in government or local government service, industry, commerce or finance.

The Inn is comprised of student, barrister and Bench members and is governed by the Masters of the Bench, usually senior members of the judiciary or Queen's Counsel.

Geraldine Van Bueren is Professor of International Human Rights Law at Queen Mary and Visiting Fellow at Kellogg College, Oxford. She is a barrister and Associate Tenant at Doughty Street Chambers. From December 2009 she was appointed by the Secretary of State to serve as a Commissioner on the Equality and Human Rights Commission.

Professor Lisa Jardine CBE is Centenary Professor of Renaissance Studies at QM. She has been Head of the School of English and Drama, and Dean of Arts, and is now Director of the Centre for Editing Lives and Letters at the College. She is a Fellow of the Royal Historical Society and an Honorary Fellow of King's College, Cambridge and Jesus College, Cambridge, an honorary Doctor of Letters at the University of St Andrews, and holds an honorary doctorate at Sheffield Hallam University.

Professor Jardine has been a Trustee of the V&A Museum for the past eight years, and was for five years a member of the Council of the Royal Institution in London. Since 2008 she has served as Chair of the Human Fertilisation and Embryology Authority. In December 2011 she was appointed a Director of The National Archives.  In 2013-14 she will serve as President of the British Science Association.