A professor of German at Queen Mary, University of London has won a major prize for his landmark contributions to German language culture and higher education policies in Germany and Britain. 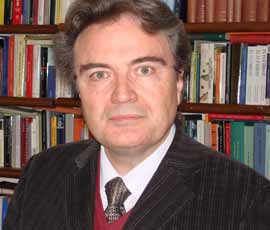 Rüdiger Görner, outgoing Head of QM’s School of Languages, Linguistics and Film (SLLF), and Founding Director of the Centre for Anglo-German Cultural Relations, will receive the Deutsche Sprachpreis 2012 for his outstanding developments in the field.

The German Association of Research Grant Foundations, which awards the prize, emphasised the outstanding quality of Professor Görner’s use of German in his academic work and public engagement work, singling out his studies on Rilke, Nietzsche and Thomas Mann, as well as works on Romanticism and the aesthetics of music.

“More than anything else, the Deutsche Sprachpreis comes with the obligation to live up to the expectations that go with this prize”, Professor Görner said, on receiving the award.

German-born, Professor Görner adds: “In order to appreciate one's mother tongue fully it helps to have spent a considerable time of one's life abroad. It is fair to say that having lived in England since 1981 has sharpened my eyes and ears for what German represents as a language and what its wealth really means.

“German is an immensely rich language with unparalleled expressiveness and depth - in poetry but also in scientific prose and philosophical discourses. As a language it is eminently adaptable; hence it lends itself beautifully to translations of the literature from other languages. It is intriguingly multi-layered and invites reflection.”

Professor Görner, who is also an essayist and critic, also praised the Department of German at Queen Mary, noting that “its work is part of the amazing achievements of generations of British Germanists”.

Founded in 1978 by the Henning Kaufman Foundation, the Deutsche Sprachpreis is awarded annually to individuals or organisations that have strived to maintain the purity of the German language throughout their academic and outreach work. Previous recipients of this award include Peter von Matt (Zürich), Norbert Miller (Berlin), Dieter Henrich (München) and the Goethe Institute.

Professor Görner will receive the award in a ceremony taking place at the Duchess Anna Amalia Palais in Weimar on 28 September 2012.

Upon joining Queen Mary, Professor Görner, a Corresponding Fellow of the German Academy for Language and Literature, founded the Ingeborg Bachmann Centre for Austrian Literature at the Institute of Germanic Studies, where he was Director from 1999 to 2004.

He founded the Centre for Anglo-German Cultural Relations at Queen Mary in 2006. Current research interests comprise representations of science and music in the German language literatures from the late 18th century to present day, poetic theory at the turn of the centuries, the literary aesthetics of repetition and the conception of pluralectics in German Late Romanticism.

Following his Headship of SLLF, Professor Görner will spend one year at the Morphomata Institute of Advanced Study (University of Cologne) as Professorial Fellow and at the University of Salzburg in 2013/14, as Distinguished Visiting Professor. His previous visiting professorships include Heidelberg, Tokyo, Mainz, Hanover, and Vienna.