Professor Heinze launches new book on the concept of injustice

Using ancient and modern texts, with special attention to Shakespeare, Law Professor Eric Heinze argues the case that justice is not always the cure for injustice but often its cause. 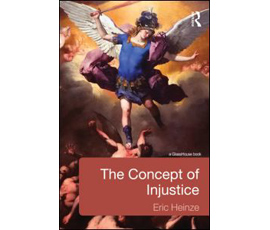 In his new book  “The Concept of Injustice”, Professor Henize challenges traditional Western justice theory developed through thinkers such as Plato and Aristotle through to Kant, Hegel, Marx and Rawls, who he believes have subordinated the idea of injustice to the idea of justice.

He explains: “The history of the word ‘injustice’ has survived for 2,500 years, from the ancient Greek and Latin.  It has prompted philosophers since Plato to assume that injustice is simply the ‘opposite’ of justice.  Two millennia later, we are left with a long line of justice theories, yet the extent to which they shed light upon injustice remains as doubtful as ever.

“The point is not that ‘justice’ or ‘injustice’ are illusory ideas, but that their meanings are more complex.  Their relationship is more intricate than one of sheer, logical opposition.  Literary texts, Shakespeare’s being exemplary, show how the criteria we constantly deem essential for justice are in fact perpetual causes of injustice.”

The Concept of Injustice is available now and published by Routledge.

The Queen Mary Law School was ranked 4th in the UK in the Guardian’s University 2012 Guide.