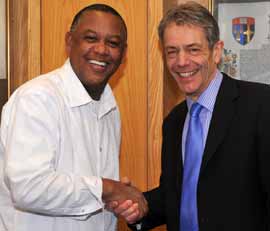 This marks the latest phase of PPP’s Points of Contact/Pontos de Contato project, running since 2010, with the support of the Brazilian Ministry of Culture, the UK Department for Culture, Media and Sport, Arts Council England and the British Council.

Over the 10-day visit, nine Brazilian VIPs travelled to Manchester and London to meet a variety of organisations using art to positively transform the lives of young people.

The Federal Secretary for Youth Affairs together with both the current and former Secretaries of Cultural Citizenship from the Ministry of Culture were among the Brazilian delegation.

There was also strong representation from State and Municipal governments as well as the Programme Director of the Bank of Brazil's Cultural Centre in Rio de Janeiro.

UK artists and policy-makers will have the opportunity to visit some of Brazil's most important youth arts organisations, responsible for initiatives which it is hoped will challenge and inspire current UK thinking.

“The exchange provides artists and funders in both countries with opportunities to learn from each other,” explains Paul Heritage, Professor of Drama and Performance at QM and Director of PPP. “I am sure these experiences will enable artistic creation to flourish, provide a cultural legacy and help to strengthen relations between our two countries.”

Of the visit, Principal Professor Simon Gaskell said: “Brazil’s unique cultural heritage, and the democratising power of the arts, provides fascinating lessons for the UK. I am delighted that the Points of Contact initiative is flourishing and that Queen Mary is involved in this important Anglo-Brazilian project.”

A full list of the delegates' names and positions is included below:

An award-winning activist, Celso Athayde is also one of Brazil’s most important hip-hop producers, an influential writer, broadcaster and social commentator. He is founder of CUFA, a highly respected cultural and political organisation operating in Brazil’s favelas.

Diogo Carvalho develops projects and policies in the Office of Youth and Digital Culture in the State of Bahia.

Ione Carvalho - Director of Cultural Access in the Secretariat of Cultural Citizenship, which oversees policies to ensure more people can access the arts.

AfroReggae is one of the leading favela-based cultural organisations in Rio de Janeiro. Betho is coordinator and choreographer of AfroReggae’s artistic subgroups Makala Music & Dance and Akoni.

As Programme Director, Francisco Raposo coordinates events staged by Centro Cultural do Banco do Brasil (CCBB). Run by the State-owned bank Banco do Brasil, CCBB hosts free and low-cost special events in the visual and performance arts, movies and music, as well as an educational program with a focus on social inclusion.

Sergio Vaz - poet and co-founder of Cooperifa, an arts cooperative developing cultural work with communities on the outskirts of São Paulo.

In 2010 PPP ran an exchange programme between 12 UK arts organisations and 12 policy-makers and funders (from DCMS to Culture Liverpool to Paul Hamlyn Foundation) with counterparts from Brazil, focusing on the Pontos de Cultura (Points of Culture) funding programme for socially-engaged, community-based cultural groups.