The Mile End Group – the forum for political debate at Queen Mary, University of London– has announced that funding from a major sponsor has now surpassed £500,000. 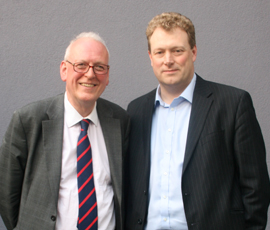 The HP funding contributes toward the running of MEG events, which attract high profile speakers and guests from across government, business, academia and journalism.

Yearly grants from HP also support the Mile End Group Assistant (MEGA) programme for students studying for an MA in Modern British History at Queen Mary. The programme covers the tuition costs of up to four students per year, with additional bursaries toward living costs. MEGAs help organise and promote MEG activities in exchange for their tuition fee waiver.

Dr Davis describes the half-a-million pound benchmark as “something rare to the point of unique in the UK for a humanities unit and a world-renowned blue chip IT firm”.

He says: “From the very start, it was been a wonderfully warm and mutually beneficial relationship and one that is ahead of its time. MEG would like to offer its deepest thanks to HP – we could not have built such a dynamic and successful organisation without them.”

The Mile End Group was created in December 2003 by research students of Professor Hennessy. The group’s initial aim was to provide a lively forum for the findings of postgraduate research, allowing for discussion in an informal yet dynamic environment. As the particular emphasis of the research centred on the worlds of Westminster and Whitehall, the MEG invited contribution from a variety of individuals with inside knowledge of government.

Over the years the MEG has created a seminar series attracting a succession of eminent speakers. Guests have included Sir John Major, Shadow Chancellor Ed Balls, Sir Gus O’Donnell and Minister of State for Universities and Science, David Willetts.