Queen Mary, University of London has been awarded almost £600,000 by the Leverhulme Trust in its latest round of Major Research Fellowships. 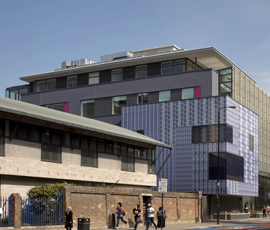 Four of the 24 awards won by academics across the UK went to Queen Mary, which is more than any other institution. Professor Julian Jackson, Professor Colin Jones, Professor Michael Kenny and Professor Jane Wills will all receive funding for research projects from the UK’s largest research fund provider.

Professor Virginia Davis, Dean for Research at Queen Mary’s Faculty of Humanities and Social Sciences, commented: “The success of Queen Mary academics in this prestigious award competition for humanities and social sciences researchers reflects the College’s commitment to original, top quality research. It comes on top of the previous year’s success, where we received three of the 30 grants available.”

The Leverhulme Trust’s Major Research Fellowships in the Humanities and Social Sciences were developed to enable distinguished researchers to commit to a single, significant and original research project of two to three years in length that they would otherwise not be able to complete. The award is made to the institution at which the successful Fellow is employed, and takes the form of providing a replacement staff member to cover the period of the Fellowship.

Professor Julian Jackson, Professor of Modern History and Head of the School of History, has been awarded £146,818 to fund a three-year project to re-evaluate the political career of 20th century French general and statesman, Charles de Gaulle.

The recent opening of an archive giving access to de Gaulle's private papers will allow Professor Jackson to reassess the view of the most dominant political figure of twentieth century France as a solitary and heroic figure who descended ‘from the heights’ when France was in crisis. He intends to, for the first time, ‘normalise’ de Gaulle and present a more multidimensional understanding of his political actions.

Professor Colin Jones of the School of History was awarded £159,298 from the Trust for a three-year study analysing the 27 July 1794- a single, pivotal day in the French Revolution that saw the overthrow of one of the Revolution’s most influential figures, Maximilien Robespierre. The project will draw on extensive untapped manuscript sources to understand how normal Parisians contributed to Robespierre’s fall and will offer new interpretations of the character of popular political upheavals, such as those seen recently in the Middle East.

The Leverhulme Trust has granted Professor Michael Kenny of the School of Politics £99,227 over two years for his study of the Politics of English Nationhood. His project will analyse the political implications of the English nation’s growing and shifting sense of national self-awareness and the causes underlying it.

The School of Geography’s Professor Jane Wills will receive funding of £158,648 for research into the Government's efforts to foster localism (new freedoms for local government and greater rights and powers for communities and individuals), and ultimately, a ‘Big Society' in the UK.

Her research will explore the rhetoric and reality of localism, documenting what actually unfolds on the ground. She wants to see if the push towards decentralisation creates new forms of political engagement, organisation and action.

"Localism might be the means through which people remake the British state and its services, as well as their sense of identity and community. As a geographer, I want to see if localism remakes popular sensibilities about place, politics and community," Professor Wills commented.