A series of events that explore different approaches to stage adaptation is set to take place at Queen Mary, University of London as part of the College’s London 2012-inspired cultural celebrations. 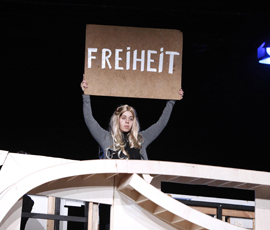 The Leverhulme Olympic Talks on Theatre and Adaptation is a series of public interviews that coincide with the international aspirations of the Games. Speakers include some of contemporary theatre’s most respected writers, directors, performance artists and academics, many of whom are based at Queen Mary’s Department of Drama.

The events, which are open to the public and are set to run between April and November 2012, focus on the transition of existing work by artists, writers and film makers onto the modern stage.

Themes across the event series include the notions of adaptation, appropriation and re-enactment in performance, the concept of subversive adaptation and the radical reinterpretation of classics, such as Greek tragedies or Shakespeare.

Award-winning director Romeo Castellucci of Societas Raffaello Sanzio, Italy’s leading experimental theatre company, will speak on Tuesday 24 April. Castelluci’s productions regularly appear at the most prestigious theatres and festivals world-wide. He will discuss the practice and processes of adaptation with Nicholas Ridout, Reader in Theatre and Performance Studies at Queen Mary and co-author of The Theatre of Socìetas Raffaello Sanzio.

The events are sponsored by the Leverhulme Trust, Queen Mary’s Drama Department and the Olympic Programme.

Drawing on the array of work making up the Cultural Olympiad (the UK’s cultural celebration, inspired by the London 2012 games) and London's cosmopolitan performance scene, the events will see theatre practitioners and scholars of diverse backgrounds explore different approaches to stage adaptation.

“The transition of an existing source or stimulus to the stage – be it film, book, play, artwork, or other performance – is not a smooth one. It requires negotiations of numerous kinds – across languages and cultures, taking into account ideological, ethical, aesthetic and political differences,” Dr Laera adds.

Each event comprises of an informal conversation, or interview, followed by questions from the audience and a drinks reception.

Time: All events take place from 6 to 8 pm unless otherwise stated. Drink receptions will follow each event.

Events are free but places are limited and booking is essential. For bookings and a full programme of events, visit: www.drama.qmul.ac.uk/news/leverhulmetalks