As part of the London 2012 Festival, 30 Brazilian artists are taking over the capital, spending 30 days creating 30 new works of art around the city during the Olympics. Expect to see magnetic bananas on London landmarks, mini performances in Londoners’ homes and artists suspended from trees. 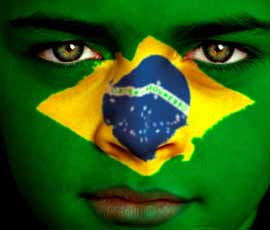 The young artists, some of Rio de Janeiro’s finest, fly in on July 6 and will be camped out at Battersea Arts Centre (BAC), in what is being described as a Rio Occupation London. People’s Palace Projects (PPP), an arts organisation based in the Department of Drama at Queen Mary, University of London, is coordinating the Brazilian/British artistic invasion.

The project is part of the London 2012 Festival, the spectacular 12-week nationwide celebration of the cultural Olympiad that is running from 21 June until 9 September 2012 (the end of the Paralympic Games).

Visual and digital artists, film makers, graphic and theatre designers, dancers, choreographers, musicians, an architect and a DJ from Rio will collaborate with British artists on works inspired by, and installed in, different parts of the city.

“Rio's artistic expeditionary force will be camped out at BAC, where they will live and sleep, but each of them will occupy a different location across the capital where they will conjure up varied creations in response to the city. Installations will appear in streets, parks, at theatres, cinemas, galleries, rooftops and homes,” explains Rosie Hunter of PPP.

Artistic directors Gringo Cardia, known internationally for his work with the Barbican, Southbank Centre and Young Vic, and Christiane Jatahy, whose work recently featured at the Vienna Festival, lead a cast of artists drawn from the frontline of a dynamic new generation of cultural innovation.

“Inspired by Brazilian artists involved in the cultural invasion of the '86 World Cup in Mexico, the London 'occupiers' are coming to the capital to start their own journey through to Rio 2016,” adds Rosie. A return ‘invasion’ is planned for April 2013, when London artists will camp out in Rio as they start their journey to the Olympics in 2016.

Rio Occupation London will build towards the three-day finale festival, which will bring together the artists and exhibit the work they created across the city during their invasion. The festival will take place at the Biscuit Factory in Bermondsey from August 1-3, 2012, as part of the V22 Summer Club.

Ruth Mackenzie, London 2012 Festival Director, said: "Rio Occupation London is bringing together 30 brilliant artists from Rio de Janeiro to work with London's leading arts organisations and surprise us all with new collaborations for the London 2012 Festival. I can’t wait to see what they produce in London this summer, and I look forward to their collaborations for Rio during their build up to the Olympic and Paralympic Games in 2016"

Adriana Rattes, Rio de Janeiro’s State Secretary of Culture said: "Rio Occupation London will strengthen international cultural relations, promote a dynamic, attractive and contemporary view of the state, establishing a world stage to present the best of Rio’s emerging art, engaging it, through its artists, in the Olympic spirit, and will create a legacy for Rio 2016.”