Media coverage of Arab Spring protests has exposed government corruption in North Africa, but has overshadowed news of political unrest across the rest of the continent, warns an African politics expert at Queen Mary, University of London. 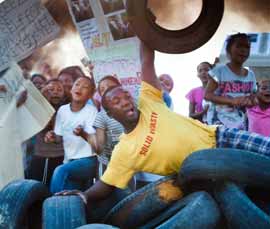 To analyse the rash of anti-government and anti-capitalist protests which have exploded across Africa in the wake of the global financial crisis, Dr Clive Gabay, from the School of Politics and International Relations at QM, has organised a free panel event in July.

Yash Tandon, former Ugandan minister, who opposed the 1970’s dictatorship of Idi Amin, will join other African activists, commentators and scholars to debate the rise of political protests from Malawi to Ethiopia. The event is being hosted at the Africa Centre, Britain's leading African cultural centre, in Covent Garden.

Dr Gabay says: “Africa tends to be a continent viewed through a prism of starvation, disease and violence. But if the under-reported uprisings across Africa have told us anything however, it is that politics on the continent does not always take place at the point of a gun.

“Western media stereotypes over-simplify political issues affecting African nations, and fail to provide a platform for the citizen of African states to articulate their political demands and messages.”

Dr Gabay also criticised Western development efforts to bring governance and democracy to Africa, which he says, “have shrunk state control, creating the ‘perfect storm’ of corruption, rising energy prices and growing inequality across the continent”.

“The protest movements we have seen emerge over the past few years cannot be reduced to a simple victory for the development industry’s efforts to mainstream Western values like liberal democracy in African states.”

In response, he adds, “African protestors have demanded home-grown solutions to their predicaments, for example, greater government oversight on transnational corporations seeking to make a fast buck out of African natural resources”.