New genes affecting high blood pressure, a condition that causes more than 7 million deaths worldwide each year, have been uncovered by scientists at Queen Mary, University of London. 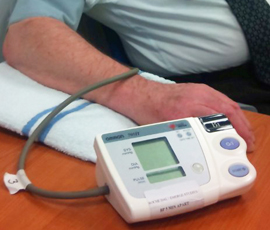 A patient has his blood pressure tested

The study, published online today (17 November) in the American Journal of Human Genetics, reveals a new layer of understanding in the causes of high blood pressure, a major contributing factor towards the incidence of heart attacks and stroke.

Senior author on the paper, Professor Patricia Munroe from Queen Mary’s William Harvey Research Institute, said: “The new genes are an important discovery in tackling heart disease and stroke but now we need to further our understanding of the way these genes function.”

Professor Munroe, Dr Toby Johnson and others from Queen Mary, along with colleagues from other universities, analysed blood pressure measurements from 25,000 people. They used a custom designed DNA chip to study 50,000 sites along the human genome.  By looking for sites where people with a particular DNA letter (A, C, G, or T) had unusually high or low blood pressure, they were able to identify genes that affect blood pressure.

“Although the number of people and the number of sites along the genome we studied might seem large, by contemporary standards this study was actually quite small.  Nonetheless, we were able to make some very important discoveries,” she said. “We can say, therefore, that careful choices in our study design paid off, and as a whole the study was very cost-effective.”

The scientists identified a total of five new genetic variants associated with blood pressure, and also confirmed a number of previous discoveries.

First author on the study, Dr Johnson, also from the William Harvey Research Institute, said: “In discovering these genes we have taken another step towards understanding the biological mechanisms that affect blood pressure.  Ultimately, this knowledge can lead to developing new treatments, or to help identify individuals who would benefit most from the treatments already available.”

One of the genes identified in the study is involved in the production of nitric oxide, a small molecule studied extensively by another group at the William Harvey Research Institute, for its blood pressure-lowering benefits.

Dr Johnson explains: “We found that the specific genetic variant identified in our study may affect how the nitric oxide-producing gene is turned on and off. In principle this could be used to develop alternative therapies for lowering blood pressure.”

This most recent work also revealed independent genetic effects at two of the genes previously identified in research led by the same team, indicating more complexities surrounding the role of genes in influencing blood pressure levels.

“We suspect that this might be the tip of the iceberg in terms of the role these genes play in affecting blood pressure,” Dr Johnson said. “We have a lot more work to do to get the complete picture of the way these specific genes function.”