Professor Richard Trembath FMedSci is the new Vice Principal and Executive Dean for Health at Barts and The London School of Medicine and Dentistry.  He succeeds Professor Sir Nicholas Wright who stepped down from the top role in July following ten highly successful years in post. 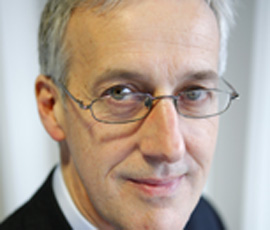 Prior to his appointment Professor Trembath was the Director of the NIHR Comprehensive Biomedical Research Centre at Guy’s and St Thomas’ NHS Foundation Trust and Head of the KCL Division of Genetics & Molecular Medicine at King’s College London. He is an Honorary Consultant in Clinical Genetics at the Genetics Centre, at Guy’s Hospital; a Senior Investigator for the National Institute of Health Research; a former Clinical Academic Group Lead within King’s Health Partners, and a Fellow of the Academy of Medical Sciences.

Professor Trembath trained in Medicine at Guy's Hospital Medical School and undertook postgraduate studies at the Institute of Child Health, London before to moving to the Department of Genetics at the University of Leicester in 1992. He was appointed to the Foundation Chair of Medical Genetics in Leicester in 1998. He serves on Advisory and Editorial Boards and Committees of numerous national and international journals and academic societies, and is past President of The British Society of Human Genetics.

Professor Trembath said: "I am really delighted to be joining the School of Medicine and Dentistry at such an exciting time in the evolution of health care, training and research across East London and in partnership across London. It is a privilege to be charged with the responsibility of ensuring that the Schools tradition of excellence will continue to drive developments that lie ahead."