A scientist at Barts and The London School of Medicine and Dentistry has been shortlisted for the Most Promising Innovator of the year award for his research on a targeted cancer treatment. 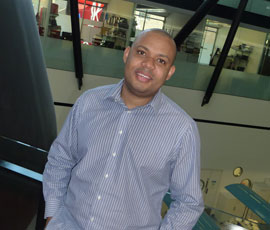 Dr Davidson Ateh is an expert in bioengineering at the School’s Blizard Institute of Cell and Molecular Science. Together with Prof Joanne Martin, he has developed a system for delivering anticancer drugs directly into the cells of a tumour. They have since founded BioMoti Ltd, the commercial vehicle to exploit this technology for patient benefit.

His work is now in line for the Biotechnology and Biological Sciences Research Council’s Innovator of the Year award. Dr Ateh is one of only six finalists who will present to the judging panel on 23 March. The winners will be announced the following day at the Bioscience for Growth event presided over by Minister of State for Universities and Science, David Willetts MP, at Glaziers Hall, London.