National research centre for bowel disease will be a UK first

A national research centre for bowel disease is to be set up in London to bring the Cinderella area of medicine to the forefront of surgical innovation. 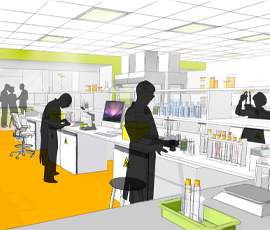 Building of the £3 million centre of excellence has just begun at Queen Mary, University of London. It will be up and running in early 2012.

The aim is to fast-track new operations for bowel disease patients and revolutionise the way new surgical breakthroughs are rolled out to hospitals all over the UK.

The NCBRSI (National Centre for Bowel Research and Surgical Innovation) will bring together under one roof scientists, clinicians and clinical trial specialists to create a national resource.

Their role will be to develop groundbreaking surgical ideas, carry out clinical trials, then disseminate their knowledge and techniques to the operating theatres of hospitals all over the UK.

The centre is expected to deliver a number of ‘firsts’ and will become a Gold Standard for research into bowel disorders including cancer, colitis, faecal incontinence and constipation which affect millions of people in the UK.

The project is supported by the charity Bowel & Cancer Research which has raised £2.4 million to get the centre off the ground.

Director of the centre is Professor Norman Williams, who became President of the Royal College of Surgeons in July 2011. Co-directors of the NCBRSI are Professor Charles Knowles and Professor Andy Silver.

Professor Williams and his team believe the centre will revolutionise the way surgical advances for bowel disorders developed in hospitals all over the UK are rolled out.  They say it could provide a framework for other areas of surgery to follow.

At the moment, says Williams, there is no recognised mechanism for developing an idea about innovative treatments for bowel disease, taking it through to clinical trial, and into routine clinical practice.

At the same time, collaboration between research scientists and surgeons is such that new techniques to help patients come about by luck more than strategy.

“Surgeons can trial a new technique in their own hospital but too often it goes no further. The infrastructure to roll out the accumulated knowledge about innovative procedures isn’t there. There are loose liaisons, but no official method. We almost rely on hearsay. It’s incredibly slow and very frustrating,” said Professor Williams.

He added that the existing research networks which enable clinical trials to take place within the NHS are geared mainly to test new drugs and non-invasive therapy. He stressed that it’s impossible to test surgical techniques in the same way.

“There is little room for a placebo in surgery. You can’t tell someone when they go in for a bowel operation that they may, or may not, end up with a colostomy bag for life,” he said.

“The centre of excellence will be able to pilot a new bowel surgery technique, then roll it out across the country. We want to develop new techniques which improve quality of life, test them, and teach them to others in a measured way. Let’s spread the knowledge more efficiently and speedily.

”We can make great strides if we can pool expertise from different sectors of the medical chain, but we need an organisation and a structure with which to do that.”

The centre’s backers say bowel disease is a neglected area of medicine which doesn’t get the research funding it deserves considering its prevalence. “Further, surgery in general is neglected, receiving less than 2 per cent of research council funding despite one in every three NHS hospital admissions requiring a surgical intervention,” said Charles Knowles.