Normal bacteria which live in our mouths provide the catalyst for the development of gum disease, a debilitating condition which leads to painful gums and the loosening of teeth, new research from Queen Mary, University of London has found. 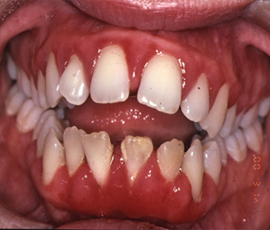 Gum disease leads to painful gums and the loosening of teeth

The unexpected finding could pave the way for the development of preventative measures in tackling gum, or periodontal disease*, by manipulating the normal bacteria in the same way that probiotic yoghurt works to protect the intestine.

Researchers at Queen Mary’s Blizard Institute, including Medical Research Council Clinical Research Training Fellow Mark Payne, worked with scientists in the US and published their findings in the journal Cell Host and Microbe today (27 October).

The scientists introduced the oral bacterium Porphyromonas gingivalis to mice living in two different test conditions. The mice with normal bacteria in their mouths developed periodontal bone loss but the mice raised under germ-free conditions, in the absence of any normal bacteria, remained disease-free.

Professor Mike Curtis, Director of the Blizard Institute and co-author on the paper, said when the oral bacterium P. gingivalis was introduced under normal conditions “it stimulated the growth of normal bugs leading to a large increase in the number of those organisms already there”.

“P. gingivalis was introduced at very low levels yet it had a major affect on both the immune system and the inflammatory system,” he said.

“This oral bacterium only appears in small numbers but appears to have a major influence on the overall ecology. It has a keystone effect in a community – working in the same way that starfish, which have relatively small numbers, control the shell fish communities in the sea.

Professor Curtis said although the findings were encouraging in terms of understanding the way gum disease develops, there was still “some way to go” before there was a similar product on the market for gum disease as a probiotic yoghurt is available for the intestine.

“Now we know that periodontal disease only develops through P. gingivalis interacting with the existing bacteria in our mouths, we need to understand the role played by our normal bacteria in both the development of disease and protection from it,” he said.

“This may then provide the means to develop preventative measures for the disease.”

Professor Farida Fortune, Dean for Dentistry at Queen Mary said the research was encouraging for people who suffer from gum disease which results in bleeding gums and ultimately loose teeth which cause difficulty in both speaking and eating.

“The public still need to be mindful of the way they look after their teeth and gums. People need to pay more attention to their oral hygiene. Their local hygienist, dental therapist and dentist can all assist in teaching them effective cleaning techniques.”

“Just these simple preventative measures, as well as not smoking, will go some way to helping them avoid developing gum disease.”

*Gum disease, clinically referred to as periodontal disease, affects 54% of the adult population in the UK, according to the Department of Health’s most recent report in 2007.