Molecular movements could lead to new way to treat cancer

Work by researchers at Queen Mary, University of London could point to a new way to treat aggressive types of cancer. 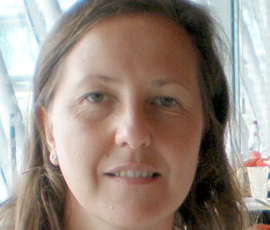 The scientists have found that a molecule called Met is responsible for stimulating the growth and spread of cancer because it is relocating to the wrong part of the cell.

Experiments in the lab suggest that moving Met molecules from the inside of the cell to the cell surface could halt the growth of cancer cells and even cause tumours to shrink.

Met molecules are involved in the growth of cells in the human body but they are usually only active in a growing embryo or in wound-healing.

However, Met has also been found in many different types of tumour, including breast and lung cancers, where cells are growing uncontrollably. And tumours with high levels of Met tend to be the most aggressive.

Previous research on Met and similar molecules has attempted to tackle the problem by completely blocking the molecule but this has only achieved limited results.

In this new study, published in the journal Nature Cell Biology, the researchers instead attempted to chemically relocate Met to a different part of the cancer cells. Using this approach they were able to halt the growth of cancer cells in the lab and shrink tumours in mice.

The researchers say the study is still in its very early stages but, in the future, it could point the way to a new treatment for cancers.

Dr Stéphanie Kermorgant, who led the study, is a Lecturer in Cellular Oncology at Barts Cancer Institute, part of Queen Mary, University of London. She said: “Previous research has indicated that Met has a role in the development of cancer. We’ve made a fascinating discovery that, in some cancer cells, this molecule is not only present but it’s located in the wrong part of the cell – it would normally be on the outside of the cell and we’ve found it on the inside.

“Our study shows that it’s not only the presence of the molecule but also where it is in the cell that may promote cancer. We’ve also shown that we may be able to take advantage of this discovery to design new types of drugs.

“Scientists have been trying to create new cancer drugs by testing chemicals that block Met, or other similar molecules, but results have been mixed.

“Our findings led us to try a new approach – using a chemical to prevent Met molecules going to the wrong part of the cell. Importantly, this method works even when blocking Met does not work.

“It’s early days but this approach looks promising and could eventually lead to new drugs for treating these aggressive types of cancer.”

The researchers were funded by the Medical Research Council and Barts and the London Charitable Foundation.