Queen Mary weaves its magic across the country

Queen Mary, University of London is aiming to enthuse and educate the next generation of scientists and engineers with its entertaining magic road shows across the country this week. 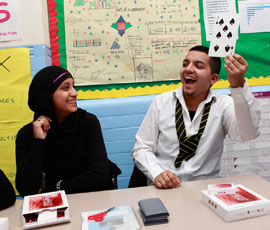 Students from schools in Leicester, Lancashire and Kent will this week learn about the behind-the-scenes magic secrets which incorporate physics, chemistry, maths and engineering. Effects include the disappearance of a bowl full of water, contacting the ‘spirit world’, cutting a person in half with ropes and making a person’s head vanish.

Professor Peter McOwan, from Queen Mary, said the Illusioneering magic shows were an “exciting way to entertain and educate students about science and engineering”.

“Throughout history all the amazing magic tricks have really been just cleverly hidden science. Performing magic is a marvellous way to have fun but also to help teach and promote real science and engineering principles. The science, maths and engineering behind the tricks we perform are as fascinating as the magic itself.”

Queen Mary, building on previous successes in using magic to help teach maths and computer science, is aiming to raise the game of science and engineering in schools with its new Illusioneering project which will enable pupils and teachers to perform ‘magic tricks’ based on cross-curricular Science, Technology, Engineering and Mathematics fundamentals.

The Illusioneering road shows are being rolled out at a time when student teachers are falling below the grade in their maths skills.

Matt Parker, stand up comedian and part of Queen Mary’s outreach for mathematical sciences, said: “Science and engineering can be exciting for students and we want to try and encourage the next generation of talented mathematicians and scientists to consider these subjects as a career.”

The Illusioneering magic road shows are being funded by the Higher Education STEM programme.