Men have a stronger response to seeing other men show emotion than when women show emotion, according to new research from Queen Mary, University of London. 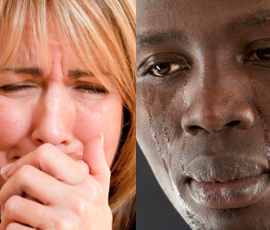 The study, published in the December issue of the journal Emotion, explored men and women’s responses to pictures of people expressing their emotions to work out what side of their brains elicited a response.

Lead author on the study, Dr Qazi Rahman, from Queen Mary’s School of Biological and Chemical Sciences, said they found that men, in particular, use the right side of their brains to recognise emotion in other male faces.

He said: “When men were showed expressions of happiness, sadness and anger in other men, they responded with the right side of the brain whereas they used both sides of their brains more or less equally when looking at emotions in women's faces.”

The scientists showed almost 100 volunteers a range of different pictures of facial expressions, each had half a neutral expression and half an emotional expression.

“There was a very strong response from men when they saw other men expressing their emotion. The strongest response was when men were shown angry and surprised male faces. This could be because men might be more wired to notice expressions indicating vigilance or threat in other men compared with women,” Dr Rahman said.

Expressions indicating vigilance or threat are known as ‘pop out’ emotions. The scientists anticipated a strong response to these types of emotions so the fact that the men’s response to expressions of surprise was strong, was not unexpected.

Dr Rahman said: “We were a bit confused when men saw other male’s expressions of disgust, another ‘pop out’ emotion, that it did not elicit a strong response. It may be that disgust is a less important cue for men than surprise and could indicate ‘withdrawal’ which men may ignore.”

The research challenges the idea of simplistic sex differences in the brain, showing they are influenced by features of both the observer and the person being observed (in this case, sex of face and emotion displayed). The findings also challenge two theories explaining how emotions are organised in the brain, as Dr Rahman explains.

“One theory argues that the right hemisphere of the brain deals with all emotions,” he said. “The other states that positive emotions are processed by the right hemisphere and negative emotions by the left. Our work suggest both theories are over-simplifications because they don’t take ‘the details’ into account, such as of the sex of the person who is showing that emotion.”