One in six mobile phones in Britain is contaminated with faecal matter, according to new research for Global Handwashing Day from Queen Mary, University of London. 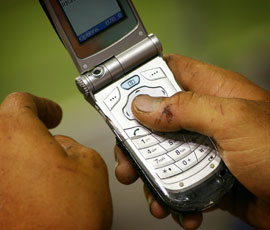 Experts say the most likely reason for the potentially harmful bacteria festering on so many gadgets is people failing to wash their hands properly with soap after going to the toilet.

The findings of the UK-wide study by scientists from Queen Mary's School of Biological and Chemical Sciences and the London School of Hygiene & Tropical Medicine, also reveal a tendency among Britons to lie about their hygiene habits.

Dr Ron Cutler, who carried out the research, said: “Our analysis revealed some interesting results from around the UK. While some cities did much better than others, the fact that E. coli was present on phones and hands in every location shows this is a nationwide problem.  People may claim they wash their hands regularly but the science shows otherwise.”

Hygiene expert and UK campaign leader for Global Handwashing Day Dr Val Curtis, from the London School of Hygiene & Tropical Medicine, said: “This study provides more evidence that some people still don’t wash their hands properly, especially after going to the toilet.  I hope the thought of having E. coli on their hands and phones encourages them to take more care in the bathroom – washing  your hands with soap is such a simple thing to do but there is no doubt it saves lives.”

Researchers travelled to 12 cities and took 390 samples from mobile phones and hands which were analysed in the lab to find out the type and number of germs lurking there. They also asked participants a series of questions about their handwashing habits.

The largest proportion of contaminated phones was in Birmingham (41 per cent) while Londoners were caught with the highest proportion of E.  coli present on hands (28 per cent). However, actual levels of bacteria increased the further north the scientists went, the dirtiest city being Glasgow, where average bacterial levels on phones and hands were found to be nine times higher than in Brighton, reinforcing a North/South divide. The scientists also found those who had bacteria on their hands were three times as likely to have bacteria on their phone.

Faecal bacteria can survive on hands and surfaces for hours at a time, especially in warmer temperatures away from sunlight; it is easily transferred by touch to door handles, food and even mobile phones. From there, the germs can be picked up by other people. Every year, 3.5m children under the age of five are killed by pneumonia and diarrhoeal diseases – and the simple action of washing hands with soap is one of the most effective ways of preventing these illnesses. In developed countries, handwashing with soap helps to prevent the spread of viral infections, such as norovirus, rotavirus and influenza.

Global Handwashing Day – which is held on October 15 every year - aims to transform the action of washing hands with soap into an automatic behaviour, deeply set in our daily lives. Initiatives and events to promote the practice in homes, schools, workplaces and communities are held worldwide.

Peter Barratt, Technical Manager at Initial Washroom Solutions, which supports Global Handwashing Day, said: “Today’s research is shocking and demonstrates the importance of effective hygiene. It is critical that people take hand hygiene seriously and that businesses offer their employees and customers a practical way of protecting themselves to help combat the spread of illness.”