The Big Knit comes to The Blizard

Giant woolly art installations representing Multiple Sclerosis will be on show at Whitechapel’s Blizard Institute in November to promote awareness and understanding of the disease. 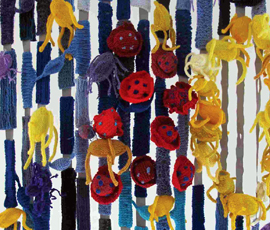 A knitted tableau showing a section of brain, revealing the changes that occur during MS

The knitted artworks are a collaborative project, between artist Alison Thomson, the British Society for Immunology, and an army of keen knitters across the UK. Launched at The Times Cheltenham Science Festival earlier this year with the help of MS researchers at Queen Mary, University of London, the exhibition is now touring the country.

The Blizard Institute, the base for Queen Mary’s internationally recognised Centre for Neuroscience and Trauma, will host the exhibition from 7 - 11 November. A launch event on the 7th will feature keynote speakers from Queen Mary’s neuroimmunology research group and from Barts and The London NHS Trust. Activities for young children will be available and refreshments provided.

The exhibition is free to enter and will be open to the public from 9-4pm in the foyer of the Perrin lecture theatre at The Blizard Institute.  Throughout the week, a film will be running, showing how the artworks were created.

The installation consists of three tableaux, each designed by Alison Thomson, which highlight a different aspect of MS: the nature of the disease, the role of genetics and the impact of our environment on the disease.

One of the most striking pieces is comprised of bright yellow, pink and blue knitted eggs, fish, sunbeams and vitamin D supplements. The work is designed to highlight sources of vitamin D after research revealed a link between a deficiency in the ‘sunshine vitamin’ and the risk of MS.

Dr Sreeram Ramagopalan of the Centre for Neuroscience and Trauma commented: "MS is a disease that is much more common in countries with a temperate climate than in warmer regions. The reason for this until recently remained an enigma, but the evidence that vitamin D deficiency through a lack of sunshine underlies this is now beyond any reasonable doubt. The team at Queen Mary are actively researching how vitamin D can be used to treat and prevent MS. The knitted art will hopefully remind people about the importance of vitamin D”.

Another tableau shows a section of brain, revealing the changes that occur as MS progresses. There is an area of normal tissue, an area of inflammation and a section which shows demyelination – the loss of a substance in the body that insulates nerve endings, resulting in the response time of nerve endings slowing down. The final section shows the scar that is left once all the myelin is removed.

Alison is an honorary member of Queen Mary’s Neuroimmunology Unit and her role as an artistic consultant is vital in engaging the public with the work done by researchers at Queen Mary and across the world. With Hannah Hope from the British Society for Immunology, they have toured festivals and galleries across the country and educated knitting groups on MS.

Over 90 knitters contributed to the creation of the tableaux, including Queen Mary’s Professor David Baker, who made it to the pages of Simply Knitting magazine. Between them, volunteers have now knitted over 300 individual items.

Professor Baker, who will be talking at the launch event, commented: “The Big Knit’s themes, including vitamin D, are close to some of the areas we work on. The project is still developing, with the team currently making a series of tapestries showing what MS looks like under a microscope. It is hoped that this new educational art work will be unveiled in time for next April’s MS Congress in Manchester, where we will use it as an information and teaching aid.”

Please email Alison Thomson if you would like to attend the launch event on November 7: alison.thomson@network.rca.ac.uk

For further information on The Big Knit, visit The British Society for Immunology