The sport and social sabbatical officer at the Students’ Union at Queen Mary, University of London (QMSU) has been elected as London Student Chair of the national governing body for sport in UK universities. 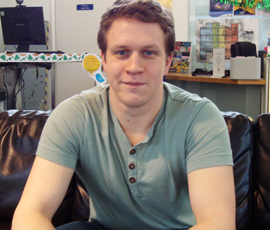 Dominic Bell, champion rower and QMSU’s Vice-Principal for Student Activities, will work for British University Colleges Sport (BUCS), coordinating the views of all universities in the capital and delivering them to the body’s National Advisory Board, on which he now also sits.

BUCS runs leagues and competitions in which student teams compete. The body also develops sporting opportunities at regional, national and international level, encouraging women’s, minority and disability sport, sports science, and participation. This fits in well with QMSU’s current goals, as they continue to develop their Sports Strategy.

Dominic commented: “I’m really excited for this year. There’s a lot going on for London and a lot to think about, whether it’s building participation and recreational leagues throughout London Universities or getting stud ents geared up for the Olympics.”

Dominic, 22, graduated from Queen Mary in 2010 with a 2:1 in English Literature. A keen swimmer from a young age, he attended Millfield Senior School in Somerset, which boasts a long list of Olympic medallists and elite athletes as graduates. The School was highly influential in introducing him to a high standard of sporting achievement and discipline.

When he started university, Dominic took up rowing, was President of the Club 2009/2010 and qualified with the 1st VIII for the Henley Royal Regatta, the top event in the world’s rowing calendar. This was the first time a team had qualified for Queen Mary in 57 years. This achievement naturally led Dominic to run for Vice President Student Activities and he is now in his second term after being re-elected this year.

On his aspirations for the future, Dominic said: “I haven’t settled on a career path just yet, but most of what I’ve learnt from my role in the Students’ Union over the past year has centred on developing sport and building participation. Perhaps I’ll end up something like Sebastian Coe. That would be an achievement.”