In the last six years, Queen Mary, University of London, has been given more national awards for teaching excellence than almost any other higher education institution in the UK.  There are currently eight members of staff who have been recognised for their outstanding impact on teaching. 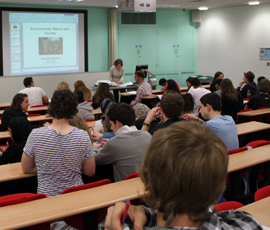 The National Teaching Fellowship awards of £10,000 aim to raise the profile of teaching and encourage teaching staff to enhance the student experience.

Queen Mary is one of only three institutions to win an award every year for the last six years, with two awarded in 2006 and 2008, placing the university equal third in the UK for number of awards received since 2006 - the first year it applied for Fellowships.

The awards, which are administered by the HEA and funded by the UK’s Higher Education Funding Councils, are intended for Fellows' professional development. Institutions can submit applications for up to three members of staff per year.

Since 2006, Queen Mary academics have also been recognised by the Higher Education Academy more times than any other institution in Greater London. The Institute of Education and Greenwich are placed second, with only half the number of awards received by Queen Mary in the same period.

Dr Matthew Williamson, of Queen Mary’s Learning Institute, oversees the application process for Fellowships. He commented: “The National Teaching Fellowship Scheme is a key way of showing the importance that institutions place on teaching. It sends a message that we take the development of our staff very seriously and that we are committed to fostering and rewarding excellence in teaching.”

Queen Mary’s 2011 National Teaching Fellow is Dr Helen Bruce from the School of Medicine and Dentistry. Dr Bruce is a medical practitioner in child and adolescent psychiatry, based in Tower Hamlets. On placements at her clinic she teaches medical students and doctors at all stages of their training, and also lectures at both undergraduate and postgraduate level.

She was awarded earlier this year for her commitment to improving the student experience, her passion for removing negative attitudes surrounding mental health, and for ensuring that psychiatry is taught in an “evidence- based, stimulating and relevant fashion”.

A full list of Queen Mary’s National Teaching Fellows can be found below: