Queen Mary, University of London, will this week be honouring an international rock star, a self-funded astronaut and a groundbreaking artist with the award of Honorary Degrees for achievements in their field. 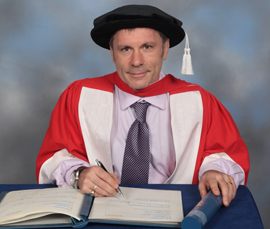 Dr Paul Bruce Dickinson, front man of heavy metal band Iron Maiden, became an Honorary Doctor of Music at Central Hall, Westminster on Tuesday 19 July. His award was presented by Professor David Baker of the Centre for Neuroscience and Trauma, in honour of Dr Dickinson’s contribution to the development of music.

On the same day, Ms Bobby Baker became a Doctor of Literature, in recognition of her contribution to art and performance – here at Queen Mary, across the UK and throughout the world. As a visionary artist, practice-based researcher, engaging performer and as a lecturer and teacher she has contributed extensively to the creative and intellectual life of the College.

On Thursday 21 July, Mr Richard Garriott was presented with a Doctorate of Science by Professor Peter McOwan, Dean for Taught Programmes (Science and Engineering), for his work with Queen Mary in promoting the importance of science, mathematics and space exploration. The award-winning computer game developer is also an entrepreneur, philanthropist, adventure traveller and space explorer, whose Ultima series of role-playing games remains one of the most successful franchises in gaming history.

As a life-long Iron Maiden fan, Professor David Baker nominated Dr Bruce Dickinson, who graduated with a history degree from Queen Mary in 1979, “because he could not think of a QM alumnus that was more deserving of recognition”.

As one of the world’s best known heavy metal singers, Dr Dickinson and his bands have recorded over 20 studio albums, selling millions of copies worldwide and generating a mass following. They have also played several benefit concerts to raise money and awareness of multiple sclerosis, Professor Baker’s field of interest, after former Iron Maiden drummer Clive Burr was diagnosed with the disease.

The multi-talented Dr Dickinson is not only a musician and song-writer, author, film script writer and TV and radio broadcaster, but also a champion fencer, entrepreneur and commercial airline captain who regularly flies his band, crew, equipment and fans (including Professor Baker) across the world in his converted Boeing 757. As a commercial airline captain for UK-based charter firm Astraeus he has also flown both Glasgow Rangers and Liverpool Football Club to match fixtures.

Professor Baker commented: “I know that Iron Maiden appreciate honours from their fans and as a fan it is my privilege to present the award. Bruce excels in so many ways and if we can aspire to a fraction of the achievements that have been made by him, then the world will be a better place.”

Professor Peter McOwan, who is also an Iron Maiden fan, added: “Scientists and engineers the world over owe Bruce a debt of gratitude. Heavy Metal music seems to have played a big part in making many of us who we are today. Bruce’s time with Iron Maiden, his intelligent lyrics and brilliant theatricals were a positive part of our youth, and his amazing accomplishments in entrepreneurship, aviation and entertainment make him a genuine British polymath to be proud of.”

Dr Baker was presented with her degree by Dr Nicholas Ridout, Reader in Theatre and Performance Studies, for enhancing the lives of Queen Mary’s staff and students through her artistic vision, intellectual energy, resilience and humour.

In a career spanning 35 years, Dr Baker has developed an extensive repertoire that explores life, health and human behaviour through performance, food, installation, radio, TV, painting and drawing. In 2005 she was awarded an AHRC Creative Fellowship in the School of English and Drama at the College and has since published a retrospective of her career, Bobby Baker: Redeeming Features of Daily Life. Her 2009 exhibition at the Wellcome Collection in London, Diary Drawings, attracted over 50,000 visitors and is currently touring major museums all over Europe.

British-born Dr Garriot has explored the wreck of the Titanic, hunted meteors in Antarctica and in 2008 realised his lifelong dream of travelling in a space shuttle to the International Space Station. His support for Queen Mary’s outreach programmes in local schools and help in launching inspiring competitions have captured imaginations and encouraged children to study science at school and university.

Professor McOwan commented: “Richard’s spectacular life story, storming from video games pioneer to explorer, scientist and space entrepreneur is the stuff of modern-day legend. While changing the world around us Richard has also been an outstanding champion in helping us to inspire the next generation of scientists and engineers here in London and globally. We are delighted that his talents and drive can be recognised today by his award of a DSc from Queen Mary.”

On receiving his award, Dr Garriott commented: “Being an early pioneer of the computer games industry has come with many benefits, but academic involvement was not one of them. Working with Queen Mary over the last few years to help develop academic outreach to UK students has been a singular joy; it has allowed me to contribute academically in ways I missed out on in the early days of the industry. It will be a personal highlight of my life, to receive an honorary degree from Queen Mary - it will fill in a notable gap in my personal story."