The first graduation ceremony of the academic year for Queen Mary graduates took place on Wednesday 29 June, when some 435 students who had been studying at the International School of Beijing University of Posts and Telecommunications (BUPT) were given their University of London degrees. 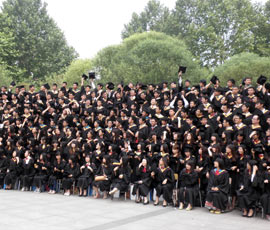 The students, who had each been studying for one of two joint undergraduate degree programmes taught by staff from Queen Mary and BUPT, took part in a BUPT graduation ceremony the previous day.

The ceremonies also acknowledged some remarkable achievements by the students, whose course work, projects and examinations were all stringently marked and verified in both Beijing and in London.

Out of the 479 students, 201 achieved First Class Honours with 76 per cent achieving 2:1 degree classification or above. More than 83 per cent of graduates are continuing their studies at Masters’-level; for which 68 per cent of all the graduates will go abroad - almost five per cent higher than in 2009-10; compared with 19.4 per cent across all other schools in BUPT.

Stanford University has offered places to three students including Telecommunications and Management graduate, Wenjia Xu. Wenjia achieved the highest ever score for her final year project of 100 per cent, acknowledged both by Queen Mary, UK external examiners and BUPT examiners. Her achievements were recognised during the ceremonies as she was awarded a First Class Honours degree; she was the recipient of a Queen Mary College Prize, named a Beijing Excellence Graduate; received a BUPT Excellent Project Award and was the sole winner of the 2011 IET Prize. Wenjia Xu said that her achievements were down to the “four years study in the International School which enabled her to achieve this “precious opportunity”.

This year’s graduates have been accepted by more universities than ever before, including Tsinghau University; the University of California, Santa Barbara; Imperial College, London; Queen Mary, King’s College London; NYU; and Surrey. Acknowledging the achievements of the students, President of BUPT, Professor Binxing Fang, said how proud he was to be able to claim that the young people in front of him were students at his university.

Professor Simon Gaskell, Principal of Queen Mary, University of London noted that there were now over 1,600 graduates of the Joint Programme who were making huge inroads in employment, postgraduate study and research as well as fostering wider knowledge about the joint programmes and the importance of an international education.

This was a theme also touched on by Mr Christopher Wood, Deputy Minister at the British Embassy in Beijing who attended the ceremonies. He said “The BUPT and Queen Mary Joint Programmes contribute a deep foundation and understanding for UK-China ties and offer all former students an opportunity to create partnerships in fields as varied as business, technology and science and making important contributions to the social and economic development of both countries.”