Tony Blair hosted history students from Queen Mary, University of London, for over an hour on Friday 20 May, in the final 'Blair Government' course seminar. 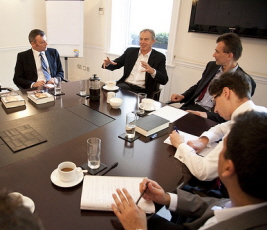 At his offices in Grosvenor Square, a select group of undergraduates and postgraduates had the unique opportunity to quiz the former British Prime Minister on his 10 years at the helm – from 1997 to 2007.

Since it began in September 2008, 36 third-year students have taken the Blair Government Course, the first in the UK to cover the ‘ultra’ contemporary history of New Labour. The course is run by Dr Jon Davis, from the School of History, and Independent on Sunday columnist, John Rentoul.

“Blair's decade in 10 Downing Street was undeniably eventful and hugely interesting, and that would be reason enough,” said Dr Jon Davis, explaining his rationale for setting up the course.

“But the internet, the Freedom of Information Act, and a shift in attitudes towards governmental secrecy and gossip from civil servants and politicians alike, have all aided the creation of this cutting edge course, with unprecedented access to high quality and plentiful primary evidence.”

Over the past three years, the course has played host to key players in the Blair Government from politicos such as Ed Balls, Alastair Campbell and Lord Mandelson to senior officials such as Sir David Omand, Sir Peter Ricketts and Sir Kevin Tebbit.

“To be able to finish the course with the main man himself was truly special,” said Dr Davis. “An incredible grand finale!”

The course is now set to expand and evolve beyond the Blair years to the whole of New Labour’s days in power (1997 to 2010) and will be 'promoted' to Masters level. The new MA course, 'New Labour in Government' will start in January 2012.

A selection of photographs of the event are available here.