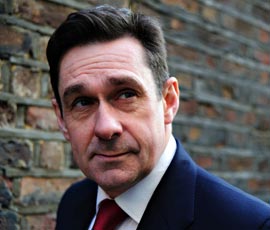 Run by the School of Business and Management from Tuesday 12 April to Wednesday 13 April 2011, the event features leading scholars discussing new research and emerging issues in the field of business ethics, critical management studies and corporate social responsibility.

Professor Stefano Harney, Chair of EBEN (UK), and Deputy Head of the School of Business and Management, calls the conference, “the place where the business school must confront the consequences of its actions and seek to intervene in the ethical life of society”.

“This conference will not shy away from posing some uncomfortable and challenging questions,” adds Dr Emma Dowling, Lecturer in Ethics, Governance and Accountability at Queen Mary, and EBEN event co-organiser.

“The question of what the responsibilities and possibilities for meaningful intervention are – in the classroom, the boardroom or the media – is perhaps the most crucial question for current business ethics scholarship.

“At a time when universities themselves are under huge pressures to conform to dominant business models, the question of critical interventions in the public sphere looms large.”

Paul Mason, who is key note speaker on April 12, spent nine years covering business in specialist magazines and newspapers before making the move into television. He joined Newsnight as business and industry correspondent in 2001, taking over as Economics Editor seven years later.

Mason has won the 2003 Wincott Award for business journalism; was named Workworld Business Journalist of the Year in 2004 and scooped the Diageo African Business Reporting Award 2007 for his acclaimed film on how mobile phones are changing Africa.

His report on the social movements behind Bolivian president Evo Morales was cited when Newsnight was awarded the Orwell Prize (2007).

Mason is also author of Live Working or Die Fighting: How the Working Class Went Global and Meltdown: the End of the Age of Greed, and the BBC Radio Four series Spinning Yarns, a highly personal account of the history of the cotton industry in his home region of Lancashire.

In addition to his acclaimed Newsnight blog Idle Scrawl, Mason’s news feed @paulmasonnews ranks 55 in the Twitter 100, according to The Independent.

Paul Mason’s lecture starts at 11am on April 12, 2011, venue TBC. This is a free public event, open to all, but there is a fee and registration requirement for the rest of the conference. For further information, please contact Mr Ade Alele (a.alele@qmul.ac.uk).